Director/Actor/Writer Larry Eisenberg earned his MFA from CalArts, received a DramaLogue Award for the world premiere adaptation of Isaac Bashevis Singer's Stories for Children and has directed numerous productions at GRT. His favorites include The Poor of New York, Trip to Bountiful, Over the River and Through the Woods and his original play, Nautilus, which was later turned into a feature film. He currently serves as one of the two co-artistic directors at the Group Rep. He is currently directing Lost in Yonkers at Group rep which will have its official opening Friday, September 8.

When you and Chris Winfield were putting together the Group Rep's 2016-2017 Season, what drew you to this particular Neil Simon play? How does it fit into the overall theme of the season, "why do people do the things they do? ... explore the reasons and rhymes of these creatures called human beings."

Lost in Yonkers has always been one of my favorite Neil Simon plays. Sometimes he doesn't get the respect he deserves because he is so very funny and people take him for granted. I think the public thinks that's all there is to his work. There's a reason he's so successful and popular and it's not just because he knows how to be funny and create entertainment. "Yonkers" won a Pulitzer Prize and I think it's well deserved. There's a great deal of humor but also profound tenderness and insight into human behavior. Obviously, we thought it would do good box office and that was one of the considerations in selecting it for our season. We also felt that it was something we could cast well from within our company.

One interesting thing about the play is the fascinating array of multi-dimensional characters. These people are damaged and each one has his or her own emotional and personal baggage. Despite these issues, they care intensely about each other and ultimately form a tight family unit that brings salvation and healing to each of them. As Uncle Louie says, "There's nothing like family, boys. The one place in the world you're safe is with your family."

You trained and work as an actor. When did you start directing and what was the play? What did you learn from that first experience as a director that still holds true today?

Actually some of my first professional work was as a director. Right after undergraduate school, I wrote a political piece about the Berrigan Brothers and the Vietnam War. It had a great run in Baltimore and then toured colleges throughout the East Coast. From that I got hired to direct a rock musical inappropriately named Can't Stop Now! We opened at the Anderson Theatre on 2nd Avenue in New York right after Oh! Calcutta! closed there. I guess this would have been around 1970. The New York Times headline read: "Can't Stop Now Should!" And we did. Oh! Calcutta! had a record 1314 performances. We lasted 7.

I think the biggest thing I learned was to keep things simple. You've got a story; just tell it and don't waste a lot of time trying to make it fancy.

After Can't Stop Now I worked as an actor at Center Stage in Baltimore, then came to California and focused primarily on my acting. Over the years, I did direct several plays but did not decide to commit to directing until 1995 when I enrolled in the MFA Directing program at the California Institute of Arts. That's when my relationship started with Jules Aaron who was my mentor and head of the directing program there.

How did that relationship develop and were there any others?

I probably served as his Assistant Director a half dozen times over the years. Jules taught me the importance of starting with a solid floor plan. Jules is a brilliant Dramaturg, probably the best I've ever known, and he always reinforced the need to "tell the story." Everything else is incidental.

At CalArts there was also a program called DTVC, Directing for Theatre, Video and Cinema. Much of the focus was storytelling and writing. A man named Lou Florimonte headed that program and I worked very closely with him. The lesson from Lou was that words were the absolute last thing you needed to work on. He encouraged me to approach everything like a silent movie. Work with the people and the behavior. The spoken word can wait.

And, of course, Lonny Chapman. I acted opposite Lonny several times and was directed by him at least 3 or 4 times. I directed Chaim's Love Song during Lonny's last year. His health was quickly deteriorating but he still managed to come and see the show 8 times. Chaim's was the last show Lonny saw at the GRT. 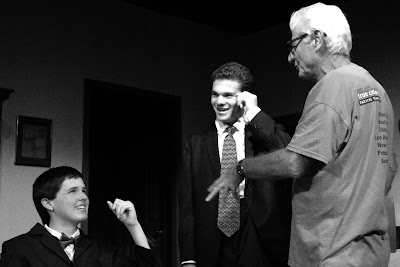 Tell us a bit about Lost in Yonkers.

It's about family love. The play takes place in 1942 and focuses on two young boys who are sent to live with their no-nonsense grandmother for 10 months. They're not happy to be there and she's not particularly happy to have them. Grandma Kurnitz is harsh, demanding and completely unsentimental. Yet somehow a bond and understanding develops between these people, probably because of the sweetness and challenges of their child-like Aunt Bella.

What would you like the audience to take away from having seen the play, something to reflect on?

At the end of the play, Grandma Kurnitz tells her grandson Jay, "You want to hear what my truth is? Everything hurts. Whatever it is you get good in life, you also lose something." Jay says, "I guess I'm too young to understand that," and Grandma says, "And I'm too old to forget it."

Photos: Al Pacino in THE BASIC TRAINING OF PAVLO HUMMEL

Industry: The College Showcase Must Go On (Virtually!) - Part 1

Industry: Social: Broadway Reacts to the Passing of Terrence McNally