The Office of Arts, Culture and the Creative Economy's Percent for Art Program and Philadelphia International Airport are pleased to announce the completion of Nonstop, a new site-specific public artwork by Philadelphia-based artist Arden Bendler Browning. This commission is part of a restroom renovation in Terminal E. These renovations and other improvements enhance the airport's experience for the 30 million plus annual passengers by providing them with world-class amenities, facilities, and public art.

Ms. Bendler Browning created Nonstop, a 17' long painting that uses abstraction to references landscape, memory, and place. Ms. Bendler Browning's process begins with an ongoing practice of photography that she uses as source imagery. She then samples subjects, colors, and patterns from the photographs into a new collage. The work is not direct representation, but abstract in order to convey a sensibility and emotion of the moment. According to the artist, her paintings "capture the feeling of a particular location and the reality that these places are both fleeting and permanently etched into our life experience." As such, Nonstop reflects back to the passerby their inherent experience of transition while at the airport. Her intention for the work is "to be multifaceted and dense, full of action, vibrancy in unexpected places, with pockets of space and clusters of commotion - just like Philadelphia."
Arden Bendler Browning is a Philadelphia-based artist. She received her Master's of Fine Art from the Tyler School of Art. Her work is recognized internationally and collected by the West Collection, the Pennsylvania Convention Center, PNC Tower, as well as numerous private collections. Recently, her work has been exhibited at Kutztown University, the University of the Arts, the Pennsylvania Academy of Fine Arts, Arlington Arts Center, Swarthmore College, Delaware Contemporary, and the James A. Michener Museum. She is represented by Bridgette Mayer Gallery, Philadelphia, PA. 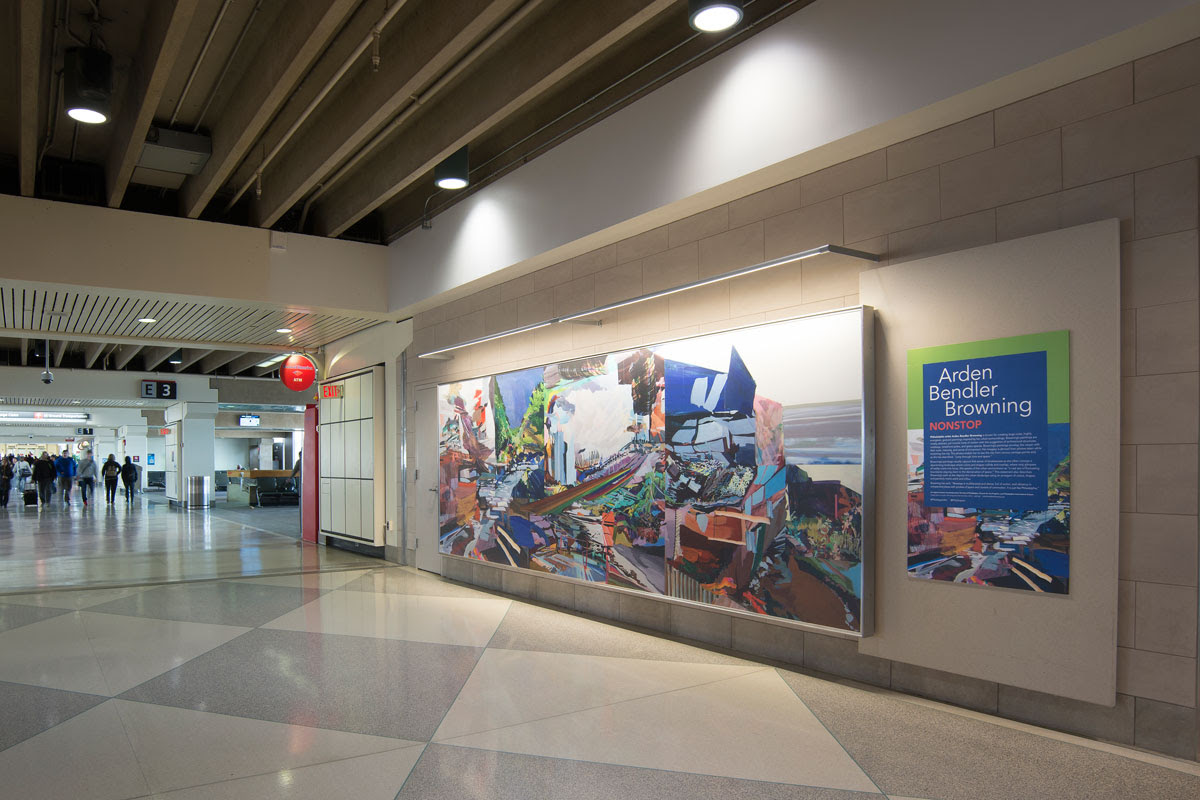 This Percent for Art opportunity was nationally announced as an open Call to Artists in September 2014 to artists and artist teams. Out of the 151 applicants, fourteen finalists were selected to present proposals. An independent selection panel consisting of Curator and Writer Judith Stein, Artist Benjamin Volta, and Artist and Curator Richard Watson, with advisory support from Conservator Katherine Cuffari, the Office of Arts, Culture, and the Creative Economy, and Philadelphia International Airport recommended these four projects for commission. About the Percent for Art Program - The Percent for Art Program of the Office of Arts, Culture and the Creative Economy commissions exceptional and enduring works of site-specific public art by renowned and emerging artists for City buildings and public spaces. Philadelphia's public art collection is recognized as the largest and most remarkable in the world. Since 1959, more than 300 works of art have been commissioned through the City of Philadelphia's Percent for Art Ordinance.

Stage Actor and SEX AND THE CITY Star Lynn Cohen Passes Away
Screen and stage actor Lynn Cohen has passed away.... (read more)

LES MISERABLES Anthem Adopted by Protesters In China and Hong Kong
Les Miserables revolutionary anthem, Do You Hear the People Sing? has been adopted as a protest song in both Hong Kong and mainland China.... (read more)

VIDEO: Go Backstage At Of COME FROM AWAY In The First BroadwayWorld Behind-the-Scenes Vlog