This Summer Marks the Final Season of BEL CANTO AT CARAMOOR 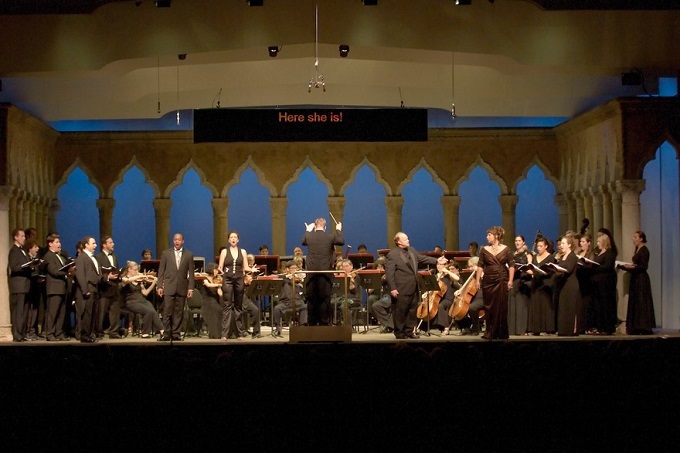 Opera at Caramoor (photo: Gabe Palacio) This summer marks not only the 20th anniversary, but also the final season of "Bel Canto at Caramoor," the program founded by Director of Opera Will Crutchfield to champion neglected Bel Canto operas and re-interpret familiar ones. To honor the program's legacy, Caramoor launches the summer season with a gala selection of Bel Canto's greatest hits in "A Night of Italian Opera" (June 17) and presents a semi-staged account of Bellini's first Bel Canto masterpiece, Il pirata (July 8). Mounted in the superb acoustics of the outdoor Venetian Theater on Caramoor's idyllic Westchester estate, both events feature the resident Orchestra of St. Luke's and showcase the exceptional artistry of 2017 Artist-in-Residence Angela Meade - "the most talked-about soprano of her generation" (Opera News) - who first catapulted to national attention in the title role of Bellini's Norma at Caramoor seven years ago. For full details of this summer's operatic offerings at Caramoor, click here.

A committed opera presenter for many decades, Caramoor will continue to be a summer oasis for opera lovers. Having provided an unparalleled, in-depth investigation of the Bel Canto repertoire during Will Crutchfield's exemplary tenure, under the leadership of CEO Jeffrey Haydon and new Vice President of Artistic Programming and Executive Producer Kathy Schuman, the artistic team will now take the opportunity to explore some of opera's other great traditions. In summers to come, Caramoor looks forward to presenting less-familiar fare from across the operatic spectrum in performances by a variety of internationally recognized orchestras and ensembles. In 2018, Caramoor turns its focus to the Baroque, with the performance of a Handel opera anchored by the Philharmonia Baroque Orchestra under its music director, festival favorite Nicholas McGegan. Meanwhile Crutchfield will transfer his Bel Canto program to Teatro Nuovo, a new organization scheduled to debut in summer 2018 with three performances of Rossini's Tancredi, kicking off a week-long festival of concerts, recitals, lectures, and a second opera title to be announced. Further details are available here.

As Kathy Schuman explains: "For the last 20 years, we have been able to delve deep into the Bel Canto repertoire which, led by Will Crutchfield, has become a highlight each summer. Historically, though, Caramoor has presented operas from the late Renaissance through the 20th century and, as we begin our next operatic chapter, we look forward to reviving this tradition. While continuing to focus on less familiar works, we will explore other areas of the repertory, beginning with the Baroque era. Opera will continue to be an important part of our summer season and I trust our audiences will embrace our new offerings with the curiosity and enthusiasm they have shown in the past." Caramoor's CEO, Jeffrey Haydon, looks forward to the future: "Caramoor is immensely proud of its role in creating and supporting the first 20 years of Bel Canto Opera Program and we are happy to hear about its new home. There is a tremendous legacy to continue, and with both Caramoor's future plans and the beginning of Teatro Nuovo, there will be rich operatic summers for all in the coming years. We wish Will and Teatro Nuovo much success." Caramoor will also continue training and fostering the development of young singers through its Schwab Vocal Rising Stars program, even as the Bel Canto Young Artists program moves on. Since the inauguration of the Schwab program in 2009, many of its alumni have gone on to make prominent U.S. and international opera house debuts; they include soprano Joelle Harvey, winner of the Gerda Lissner Foundation's 2011 First Prize Award and a familiar face from New York City Opera to the Royal Opera House, Covent Garden; mezzo Sarah Larsen, who appears this season at the Metropolitan and Seattle Operas; tenor Andrew Owens, who returned to headline Caramoor's hit production of Aureliano in Palmira last season; tenor Paul Appleby, who won the 2009 Metropolitan Opera National Council Auditions, and may be seen this season at the Met, Dutch National Opera, and Aix-en-Provence; and baritone John Brancy, whose credits include Glyndebourne, Oper Frankfurt, and Carnegie Hall.

Caramoor is a performing arts center located on a unique 90-acre setting of Italianate architecture and gardens in Westchester County, NY. It enriches the lives of its audiences through innovative and diverse musical performances of the highest quality. Its mission also includes mentoring young professional musicians and providing educational programs for young children, centered around music. Audiences are invited to come early to explore the beautiful grounds, tour the historic Rosen House and its collection of fine and decorative arts, and on special Sundays enjoy a delicious Afternoon Tea or unwind with a pre-concert picnic. Summer concerts take place in two outdoor theaters: the acoustically superb Venetian Theater, which seats approximately 1,500, and the more intimate, romantic Spanish Courtyard, which seats around 470. In the fall and winter, concerts are presented in the magnificent Music Room in the Rosen House. Caramoor's gardens, also used for concerts and the sound art exhibition Sonic Innovations, are well worth the visit and include nine unique perennial gardens. Among them are a Sense Circle for the visually impaired, the Sunken Garden, a Butterfly Garden, the Tapestry Hedge, and the Iris and Peony Garden.

Getting to Caramoor is simple by car, train or public transportation. All parking is free and close to the performance areas. Handicapped parking is also free and readily available.

By car from New York City, take the Henry Hudson Parkway north to the Saw Mill River Parkway north to I-684 north to Exit 6. Go east on Route 35 to the traffic light (0.3 miles). Turn right onto Route 22 south, and travel 1.9 miles to the junction of Girdle Ridge Road where there is a green Caramoor sign. At the junction, veer left and make a quick right onto Girdle Ridge Road. Continue on Girdle Ridge Road 0.5 miles to the Caramoor gates on the right. Approximate drive time is one hour. By train from Grand Central Station, take the Harlem Division Line of the Metro-North Railroad heading to Southeast, and exit at Katonah. Caramoor is a 3.5-mile drive from the Katonah station, where taxi service is always available and free shuttle service is available for select performances. For current information, check the Metro-North schedule. For the performances of Il pirata and Petite messe solennelle, Caramoor offers ticketed, round-trip transportation from NYC on the Caramoor Coach, a luxury air-conditioned coach traveling from Grand Central/Lexington Ave to Caramoor's front door and back. To learn more, contact the Box Office.

Join the BroadwayWorld Book Club with THE UNTOLD STORIES OF BROADWAY Vol. 1 and Discuss with Jennifer Ashley Tepper

Industry: The College Showcase Must Go On (Virtually!) - Part 16