Michelangelo and More at the MET/METs

If a lessor Leonardo goes for about half a billion dollars what's the Sistine ceiling worth- the Sun, the Moon and a one time planet like Pluto as a throw in? The exhibition at the Metropolitan Museum, Michelangelo: Divine Draftsmen and Designer only fails for the allusion and lust for alliteration. Michelangelo di Lodovico Buonarotti Simoni, a contemporary of Leonardo di ser Peiro da Vinci was, like Leonardo a multi talented artist. Whereas Leonardo had his hands in weapons of minor mass destruction, botany, mathematics and dead bodies, Michelangelo worked primarily in the three big fields of the day- painting/drawing, sculpture and architecture. I do not think of Michelangelo as a designer but ever since the great success of the Alexander McQueen show, the MET has DBD: designer on the brain disease.

If you forgive the MET's lust for luscious language you will not have to forgive much else in this truly once in a lifetime exhibition. With the help of 50 plus institutions and yes a very very big investment bank over 133 drawings and other irreplaceable art works are brought together in a way works are not likely to come together again in NYC even if we survive the nuclear threat from the north and one or oy vay, two Trump presidencies.

Indeed everything seemed better back in the high Renaissance. Their names were elegant, the art was unquestionably brilliantly skilled and mesmerizing and talent was understood. Yet I bet the lessor known names of the day were something like Paul di poorer uv Detoo and Tom di Smellyest uvdemmall. Water wasn't running much in the toilets in those days and ducking from the emptying bucket was wise before entering a castle. We just gleam the best past light and forget the darkness and hardship of past eras.

What was modern in Michelangelo? Mikey's figures flow. Though they seem idealized and beautiful often they were crude and raw, over-muscled with elongated belly buttons and tiny uncircumcised penises. Sweeping and flowing overly torqued form for the sake of motion and not necessarily a realistic portrayal uses artistic license freely to accentuate and heighten the emotional impact. Most of the drawings use a combination of line and cross hatching with great edge work on the outlines to reveal the sitter and brings Van Gogh to mind.

The ultra modern in Michelangelo is the combination of objects on a page. Many of the works have a drawing and a detail of the drawing developed and then something from left field. This odd combination of parts predates surrealism by 400 years and evokes an eerie imaginary world of the subconscious of mankind or a world beyond consciousness. Spy the tree and the apparent bird beak embedded in the trunk in the drawing above on the right. Below compare Bosch to Michelangelo's only painting in the show. Both were forerunners of surrealism. 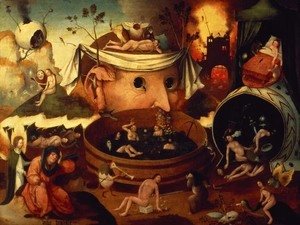 Someone mentioned to me while looking at a drawing that she wished she could draw just one knee in her whole life as well as that knee we gazed upon. I said she could and she thought that was a bit big of me. If you don't shoot for the stars you won't have a chance at Pluto. One take away for the exhibit was we can compete with Michelangelo given the revelation that at least the Sistine Ceiling was not done on a whim. This show has many brilliant studies made to hone his vision for what is no doubt man's greatest artistic achievement.

Michelangelo's drawings are architectural in feel at times. There is a drawing of a chicken's foot that tells the story of engineering and cathedral structure and the architecture within bone structure. Nature informs technology.
There seems to be two things pulling hard in different directions and motivating and moving his hand: a desire to set the figure and object in space and ground it and a desire to elevate and reveal the spirit, the invisible within.

Upon exiting do the best thing you can at the MET. See totally different art from a different era. You can't but miss the work of Franciose August-Rene Rodin near the Michelangelo exhibit and see how the two were brothers from mothers separated almost 300 apart and yet akin in spirit as few kin are. You have to give the MET free credit for the un-curated combination that is revealing, links the past to the present and didn't evolve moving any heavy Rodin sculpture. Continue through other galleries to see the sculptor from Greece's past for a stiffer presentation of the sublime and you decide which gets you feeling more human not to defile the beauty of the synchronized lines and symmetry play in those works.

Even better, walk a few blocks south to the MET's MET Breuer and see the Munch exhibition. There too you will see a similar urge to capture expression and emotion at the expense of realism in an effort to get at what is more real, more universal and more human felt. Munch had a tough life and the major themes are loss, death, isolation, decay and sadness. Munch comes out a true heir of Van Gogh's great color revolution. Yes, bring tissues but go see it for the amazing use of color you can not get from a computer screen image of art and the presence of the pieces.

RECAP: Cheyenne Jackson and Jenn Gambatese Sang on STARS IN THE HOUSE


From This Author Barry Kostrinsky

Barry Kostrinsky is the founder of Havensbx and Haven Arts. Gallery and performance spaces that reinvigorated the South Bronx arts scene from 2004-2017. The Municipal (read more...)