BWW Review: Funfilled Panto of BEAUTY AND THE BEAST

Lythgoe means talent and for several years the family have been entertaining us at Christmastime, with a British panto, American style. A panto is an interactive entertainment that starts with a very contemporary retelling of a fairy tale such as this year's treat Beauty and the Beast: A Christmas Rose and turns it into a highly imaginative show with pop music that will appeal to both children and their parents...but primarily to expose kids to an engaging theatrical experience. There's usually an actor or two in drag, and a villain ... and audience are encouraged to root for the heroes and BOO loudly at the villains. It begins first and foremost with an upbeat script by Kris Lythgoe, replete with silly lines and a lot of play.on.words. To put the younger audience into the spirit, apart from the screaming and booing, Beast masks are on sale and for the adult ladies, long-stemmed roses. This family show plays at the Pasadena Civic through December 24. 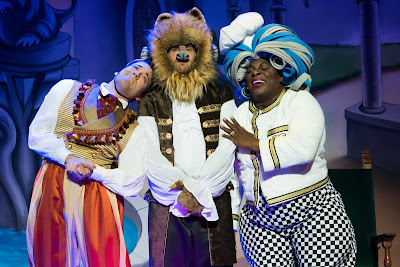 Most everyone knows Beauty and the Beast from the fine musical retelling of the fairy tale. Redemption, hope, faith and love are at the core, and Kris Lythgoe has kept the lovely story pretty much in tact with some great choreography from Mandy Moore - those kids can really dance - and overall slick staging from director Sheldon Epps. In the Panto version, the place is Pasadena, France...and the villain, Gus (James Snyder) a muscular stud who typifies self-adulation. Belle (Kelli Berglund) is the beautiful heroine who with her father Marcel (Gedde Watanabe) are held prisoners of the Beast (Jonah Platt). Gus tries to win Belle, but the wise young girl prefers the intelligence and thoughtfulness of the Beast who is actually a handsome Prince, under the spell of a curse. Love wins out, and the curse is broken allowing all to live happily everafter.

The cast is divine. Berglund is pretty with a sweet voice. Platt wins us over with charm and honesty. Snyder steals the show as Gus. This handsome guy has such a wonderful sense of humor that you laugh right along with him, as he flaunts his egotistical pose. And what a voice....he is the best singer onstage! Jared Gertner is awfully good as his servant Pierre and John Tartaglia as Louis Vuitton and Harrison White as Coco Chanel, the Beast's advisors and best friends are hilarious. White also essays Dame Derriere to ultimate audience delight. Everyone sings, dances and camps it up to the max. There are two teams, the Red and the Magenta. I saw the Magenta on opening night and cannot give enough praise to the kids who danced up a storm to pop tunes like "Stayin' Alive" and "All Night Long". 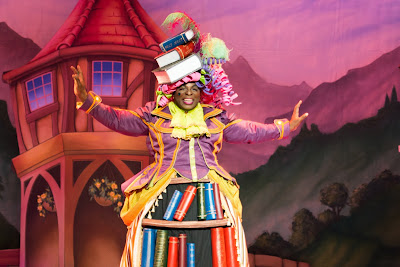 Kudos as well to Michael Orland for his terrific musicianship with his three-piece band...and to set designer Ian Wilson and costume designer Albermarle for their ultra colorful work.

Go see Beauty and the Beast: A Christmas Rose through Christmas Eve only! You'll laugh, and have a truly enjoyable evening. You'll also be helping to support many children's organizations. 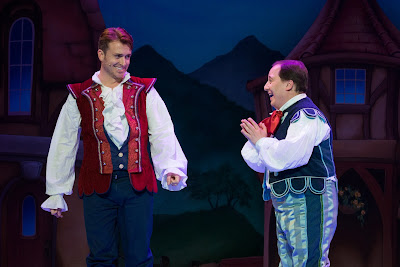