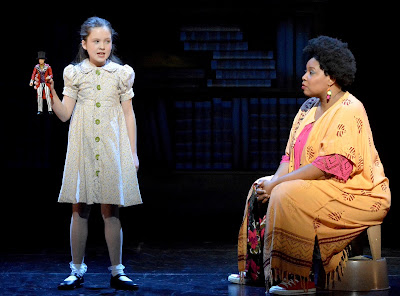 How often do you get the chance to see a musical fit for the entire family...one that is both entertaining and illuminating? Roald Dahl's Matilda the Musical is a sumptuous treat for the eyes, ears and mind. Imagination runs amok in choreography, staging and the casting of some amazingly talented children. To get a bevy of child actors to essay these little "maggots" so incredibly well for two and a half hours is no minor feat. It's like the song claims: it's a "miracle!" Currently in its regional theatre premiere at Thousand Oaks Civic Arts Plaza, Kavli Theatre through March 31 only, the show is a big winner for 5 Star Theatricals.

For those unfamiliar with Roald Dahl's satirical story, which is the basis for Dennis Kelly's book, it centers on the intense emotional and physical abuse of small children by both parents and educators. The Wormwoods (Janna Cardia and James Larsen) hate children; she would rather enter dance contests with a handsome Rudolpho (John Paul Batista) and he, watch the telly when he isn't milking customers buying trashy used cars. He refers to Maltilda (Lucy Bollier sharing the role with Olivia Marcum) as "boy", since he never wanted a girl. Escaping from her oppressive parents at an early age, Matilda devours literature like Tolstoy and Shakespeare and develops great imaginative powers. At school, the headmistress Miss Trunchbull (Nicholas Mongiardo-Cooper) is a dictator who gets off on rules and extreme discipline, inflicting corporal punishment on a daily basis. The only saving grace on the faculty is Miss Honey (Katie DeShan), a sweet caring teacher who sees Matilda's genius as a plus and tries to put her into advanced placement, to no avail. She gets zero cooperation from either Trunchbull or the Wormwoods. 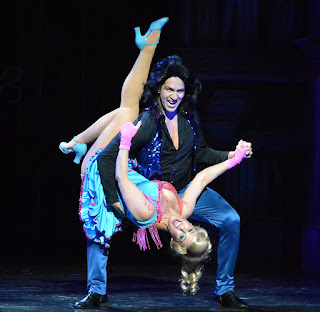 Matilda acts "naughty" as a form of rebellion, playing pranks on her father. When his hair turns green, she is the culprit. But her imagination hardly stops there. She concocts a sad but colorful story about an acrobat and an escape artist which she tells to the librarian, Mrs. Phelps (Deanna Anthony). In the story the couple fall in love and try desperately to have a child, but are forced to work, performing under a horrific contract drawn up by the acrobat's sister, who later abuses their young daughter. Matilda thinks she is inventing the story but later learns that it is actually the real life of someone she loves. Matilda is both clairvoyant as well as possessing the power of telekenesis (moving objects), which she uses to her and her friends' advantage against the absurdly cruel Trunchbull.

Wilkenfeld's staging is nothing short of terrific as is Castillo's choreography. The children move about with a skill and panache, usually reserved for dancers of increased age and experience. Tim Minchin's music has a sharp rock sound which works perfectly with the over.the.top cartoonish execution of the story. Set design by Stephen Gifford, costumes by Noelle Raffy and lighting by Jose Santiago are bright, loud and In Your Face, again a perfect match for this cartoon. 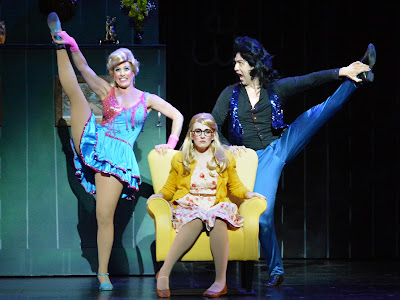 The ensemble play big, bold and electrifying with Mongiardo-Cooper making the most of Miss Trunchbull's sadistic behavior. Portraying the female character as a male in drag is genius on the creators' part. Trunchbull is a Hitlerish role and comes off more bizarre and twisted as played by a man. Mongiardo-Cooper is a triple threat, singing, strutting and projecting his way straight to hell. Cardia and especially Larsen are comic.strip funny in their portrayals as the despiccably nasty and stupid Wormwoods. Nick McKenna is hilarious as the idiotic older son Michael. Miss Honey is the only good soul in the play; she is pretty but introspective. DeShan plays her supportive and loving throughout. It is difficult for a young American child to convey emotions and speak consistently with a cockney-like accent. Lucy Bollier is on target with these but needs to slow down a tad when narrating. My understanding of some of the story elements, particularly the scenes of the acrobat and escapologist would have been somewhat clouded had it not been fir the fact that I had seen the show previously . If you lose facts here, the outcome, the connection to Matilda's future becomes muddled. The rest of the ensemble including Marcello Silva as the fun-loving Bruce Totter, who gets punished for liking chocolate cake, are all mesmerizing. 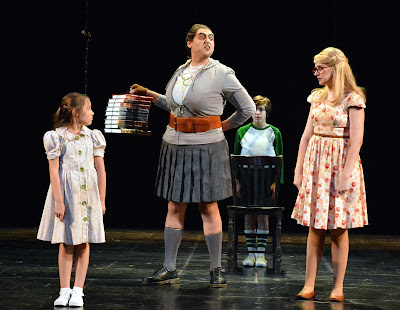 Overall, Matilda the Musical is magical, enriching and empowering. Matilda finds her way out of darkness and catches the light, so.to.speak and creates a better world for herself and for others. Like Oliver and Annie before it, the story will pull at your heartstrings. And yes, beaming brightly through the satire is a powerful advisory for children: never stop reading. And if you want to come out a winner, read voraciously!

BWW Review: Clutch Your Pearls, THE BOOK OF MORMON Has Returned to Town