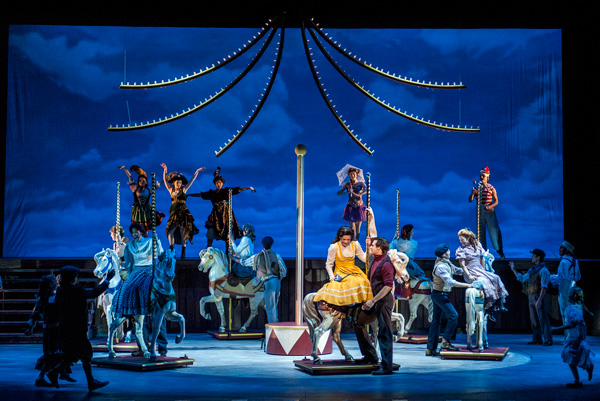 Carousel is Rodgers and Hammerstein's favorite musical. Produced on Broadway in 1945 with John Raitt and Jan Clayton in the roles of Billy Bigelow and Julie Jordan, it was R & H's second hit in a row, Oklahoma! being the first, with a string of others to follow. Any Rodgers & Hammerstein musical is among the very best there is in the annals of musical theatre history. The incredibly beautiful music alone is enough to keep an audience riveted, but Hammerstein's books were also laden with topical themes and much food for thought, as with Carousel that becomes a sort of parable for love, forgiveness and redemption. In their current beautifully mounted revival of Carousel, MTW may be assured of a gigantic hit. 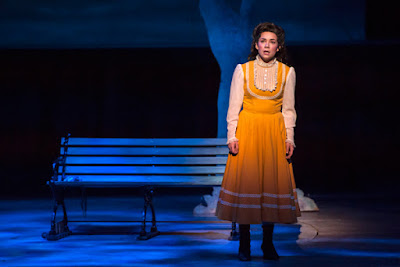 What director Joe Langworth has achieved is a production that is truly faithful to R & H. The emphasis is on the difficult struggles and challenges of daily living; the music and story intertwined speak volumes. As I sat and watched the lengthy love at first sight "If I Loved You" scene in Act I between Julie Jordan (Amanda Leigh Jerry) and Billy Bigelow (Doug Carpenter), I marveled at how divinely written it is. The dialogue: "If you loved me, but you don't!""If I loved you, but I don't!" The pauses in between are so full. Underneath, there is a passionate love seething, one that transcends time and place. Contradictions make for interesting relationships, but I also noted this time that Julie Jordan is not really that innocent and unsure of herself. Jerry brings out Julie's differences, yet putting her on a par with Bigelow. When Mr. Bascomb (Sean Smith) approaches and offers a chance to save her from Biegelow's uncaring seduction, she refuses. She knows what she wants. She is a misfit quite like Billy; so, the two are really right and wrong for each other simultaneously. And there's the rub. Destiny strikes at the very beginning; their fate is sealed. 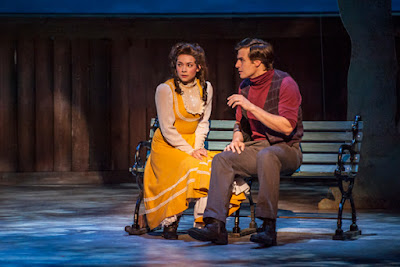 This is a glorious musical, much like an opera...and a ballet, and also sandwiched within is a story about living and dying that is universal and deeply nurtured. Jerry is a very grounded Julie with a lovely soprano voice. Carpenter manifests Billy's brusque attitude and manner to perfection. Billy is instantly taken with Julie. She is unlike any woman he has ever met. His "Soliloquy" is not delivered so much as a dynamic musical number but more as an extension of a written monologue in which he is trying desperately to come to terms with his future prospects. A truly marvelous performance from Carpenter! I am happy to say I have seen his work on local stages for the past 10 years; he has a magnificent voice and has most definitely grown into a very fine actor. Amanda Hootman as Carrie Pipperidge also has a lovely lilting voice and quaint sense of humor. And speaking of humor, Justin Cowden is delightful as Enoch Snow without pushing his character's annoyingly ambitious nature, Also wonderful are Sarah Uriarte Berry as Nettie, Erica Hanrahan-Ball as Mrs. Mullin, Jeff Skowron as Jigger - always a dandy character actor, and Kevin McMahon as the Starkeeper. Allyson San Ramon as Louise and Eddie Gutierrez as the Carnival Boy, who dances with her in Act II's gorgeous "Ballet", with bright, upbeat choreography from Daniel Smith, are deserving of praise as well. Director Langworth has nicely staged the production garnering dynamic results, particularly with the child actors. 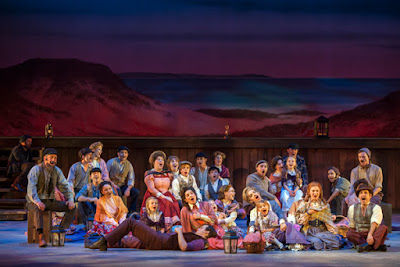 Carousel's "You'll Never Walk Alone" is undoubtedly one of R & H's greatest tunes, in line with "Climb Every Mountain" from The Sound of Music. It stirs every emotion. and like the carousel with its shimmering lights fills the darkness with a glimmer of hope. Bravo to MTW for another sensational revival.