My first association with musical composer Frank Loesser was as an actor in the 70s in a revue of his music. I played Sky Masterson of Guys and Dolls and sang a duet of "I've Never Been In Love Before". I came to realize quite rapidly how lovely his music is and how well he manages to capture the moment of genuine emotion within a song. Upon seeing Guys and Dolls several times since, I have been awestruck as well by Abe Burrows' and Joe Swerling's ability to take Damon Runyon's New York Broadway characters from the 20s and 30s and blow them up into something overwhelmingly moving and appealing. The two worlds of sin and redemption have never been connected so naturally, cleverly and colorfully nor with such style and panache. Now at MTW, director Mark Martino guides a fine cast who dive full force into Loesser's Runyonesque romp and make it their own. 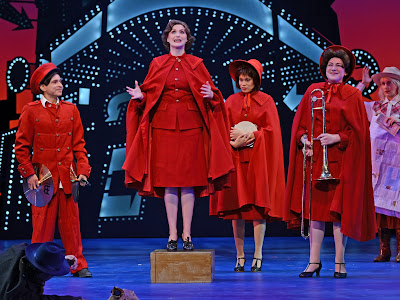 For those who have not seen the 1955 movie, let's recap briefly. It's Broadway that grew out of the Prohibition era. On the streets we see horse betters Nicely Nicely Johnson (Andrew Metzger) and Benny Southstreet (Blake Joseph), along with Nathan Detroit (Matthew Henerson), the daddy of the floating crap game, and attractive gambler Sky Masterson (Jeremiah James), who is passing through town. Detroit needs money to hold his crap game and bets Masterson that he cannot win the affections of Sarah Brown (Madison Claire Parks), a missionary whose job is setting up camp on Broadway. Masterson is about to head for Havana, and the bet includes that he cannot get Sarah to go with him. Of course, Detroit thinks he'll win the bet hands down, but is he in for a surprise. Sarah reluctantly falls head over heels in love with Sky. Outside forces are threatening to shut down the mission due to lack of attendance, and when Sky guarantees 12 sinners at the Sunday meeting, there's a stipulation. Sarah ends up going to Havana, gets terribly drunk and lets her hair down for the first time. But...back in New York sobered up, she turns Sky down, learning of the bet and that Detroit's floating crap game was held inside the mission. On the other side of the coin, Detroit is engaged to showgirl Adelaide (Bree Murphy) - in fact, it's been an interminably long engagement of 14 years. Adelaide pressures Nathan to stop gambling and to marry her. They're so mismatched, it seems obvious that they should give up on each other...but, they are in love. In order to buy into the whole succession of events here, remember it's an entertainment. But it can't hurt if you believe in the power of love. 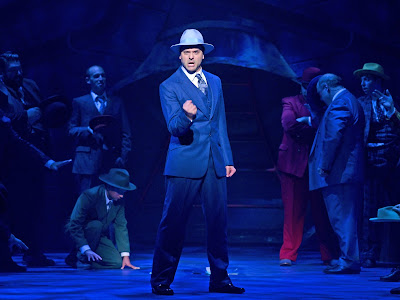 In Swerling's and Burrows' delightful book, there are lots of engaging moments. Adelaide alone is an offbeat delight, and the very idea that Sarah, a devout religious girl, lets down her guard for romance is enticing enough to keep the audience engaged, and particularly since Sky and Sarah are so damn appealing. Add to this Loesser's fantastic songs like "I'll know", "If I Were a Bell", the fun antics of "Adelaide's Lament" as well as her "A Bushel and a Peck", "Take Back Your Mink", "Sue Me" and then the rollicking "Luck Be a Lady Tonight" and "Sit Down You're Rockin' the Boat"! With such an entertaining score, how can Guys and Dolls lose? It's a fun show with spicy dialogue and shenanigans... and incredibly uplifting tunes.

MTW's cast, under the evenly paced, stylized direction of Martino, are the best. Handsome James makes an appealing Sky and Parks is not only beautiful but possesses a gorgeous singing voice. Murphy is delicious as Adelaide, making the role as close to her own creation as possible. Henerson is a straight forward but playful Detroit. In smaller roles, Metzger stands out as Nicely Nicely with a great singing voice, as does Fred Bishop as Uncle Arvide, who serenades us with the lesser hit song "More I Cannot Wish You". Praise as well to Ted Barton as Harry the Horse, and Phil Nieto as Big Jule. Special kudos to Daniel Smith for his stylish choreography and to Tamara Becker for the design of the colorful period costumes. 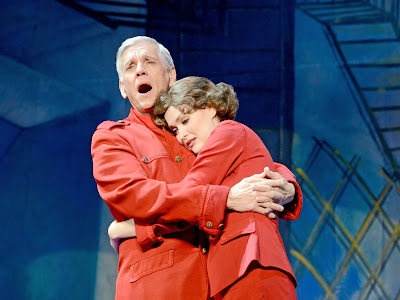 I happened to be sitting next to a teenager who really seemed to be enjoying the show. He told me after that he had never seen the show before, but loved it. I so love to see how musical theatre is appreciated by the newer generation. Guys and Dolls is indeed a hit... and MTW can boast another feather in their cap.

BWW Spotlight Series: Meet Michael Leoni, the Playwright, Bi-Coastal Director, and Co-Founder of The 11:11 in WeHo