BWW Review: A Masterful CABARET Revs Up the Celebration

This show is a classic in every sense of the word. Its sustained dark & forboding atmosphere of pre-Nazi Berlin and its celebrated Kander & Ebb score are but two glowing attributes. One, of course, cannot deny Bob Fosse's brilliant 1970 film, but, it was totally different from the Broadway show, as it became more of a showcase for Liza Minnelli's unique talent. And, the stage version has taken on a brand new look since the Roundabout Theatre revamped it in the 90s. This is not the original 60s Cabaret that had Joey Gray as MC onstage only for his musical numbers. Now the MC takes center stage and when he is not speaking or singing, lurks around, exchanging glances and fiercely reacting with the other members of the ensemble.

In the Celebration Theatre's current production the emcee (Alex Nee) weaves his way in and out of the plot as a symbol of evil about to break loose. Under the remarkable direction of Michael Matthews, the tiny space becomes the Kit Kat Club with four tables onstage and sexy waiters serving up drinks - and plenty of skin - before the show. This Cabaret is topped off by some terribly memorable performances.

Nee is In Your Face, scary and thoroughly engaging making the Emcee every inch his own creation. June Carryl as Fraulein Schneider gives an electric, full-out emotional portrayal of the aging apartment owner who is forced to look out for number one. Also touching is Matthew Henerson as Herr Schultz. In supporting roles Katherine Tokarz (through July 15) as the hooker Fraulein Kost is deliciously brazen, as is John Colella as Nazi Ernst Ludwig. Christopher Maikish plays Cliff Bradshaw with earnest intent - one of the hardest roles in the play, as he is overpowered by Sally Bowles played with an outstanding zest for living by Talisa Friedman. Her "Maybe This Time" is a heartbreaker. The Kit Kat ensemble of boys and girls are energetic and appealing. 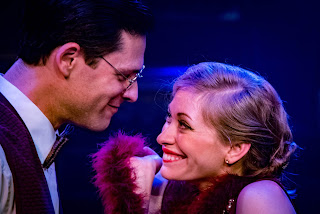 Matthews is a brilliant director, making every precise moment count. Nee at certain points wears a long jewel-like pointer on his finger. When a train whistle blows, he holds it to his neck as if he is about to stab himself and mimes a scream with open mouth, as if he were truly making the sound. Fully indicative of the horrors/atrocities of what is to come, this little addition is quite intriguing and unforgettable. Janet Roston does magnificent work as choreographer throughout, making the Kit Kat Club explode with raw sensuality within this tiny space. Anthony Zediker must be praised as well for his terrific 5-member onstage live orchestra.

Set by Stephen Gifford is simple but functional and alluring, lighting design by Matthew Brian Denman is outstanding, really bringing out the gaudy glare within dark and lurid environs. Wondefully evocative costuming, particularly the MC's bizarre chest armor and Sally's lush magenta dress and shoes are designed by the great Michael Mullen. 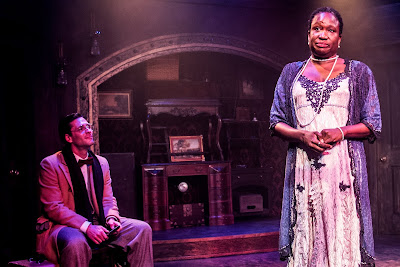 I love revisiting a classic, especially a musical. Kander & Ebb's optimistic music is enough by itself to put bodies into the seats - and "Maybe This Time", originally written for the film and Minnelli is now a permanent part of the stage score. And, another reason... appreciating the message of "Cabaret", to live for each and every moment, is more timely now than ever. This is perhaps the greatest musical of all time next to West Side Story and Celebration's production ranks right up there with Roundabout's latest national tour. 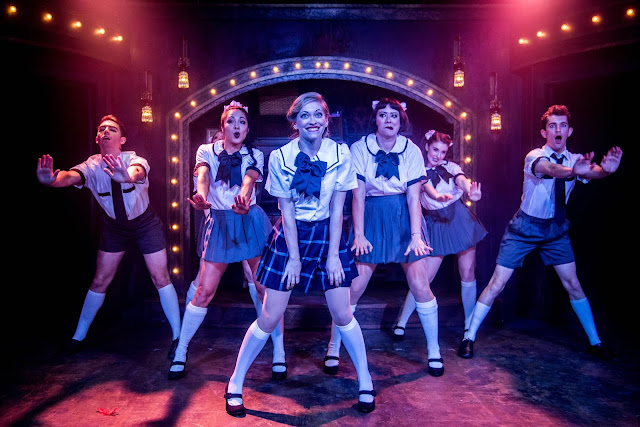 Official: Re-Imagined AIDA Will Premiere at Paper Mill Playhouse and Tour in 2021