The Best Places To Be This Veterans Day 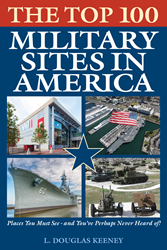 TopMilitaryDestinations.com this week released The Top 100 Military Sites in America, the first-ever ranking of known and not-so-sell known military destinations in America. The book published by New York's Lyons Press is a road map for those who want to experience America’s proud military history and lists more than 150 destinations in more than 40 states among them nine important World War I sites. “Nothing matches the National World War I Museum and Liberty Memorial ,” said author Douglas Keeney. “What they’ve built there in Kansas City is truly spectacular realistic dioramas, trenches like they lived in 100 years ago, and interactive exhibits that tell the terrible history of this war.”

But Kansas City is not the only place for this November 11th Veterans Day. Keeney offers these other suggestions:

Triangle, Virginia (Washington DC area). The National Museum of the Marine Corps. “Recently reopened after a $50 million upgrade, this is one of the most spectacular museums in America with all of our conflicts honored.”

Chicago, Illinois. The Pritzker Military Museum and Library. Says Keeney: “Right across the street from the art museum is this little gem with the famous painting of Colonel Charles Stanton at Lafayette’s memorial. ‘Lafayette, we are here!’”

Red Hook, New York. Says Keeney: “The Old Rhinebeck Aerodrome is a WWII airbase complete with biplanes that take to the air most weekend.”

Hattiesburg, Mississippi. The Mississippi Armed Forces Museum. Trenches, WWI tanks and an outdoor exhibit area where you can honor all veterans. Says Keeney: “This little known destination has outdoor exhibits and acres upon acres of tanks and helicopters plus the WWI exhibits.”

Wheaton , Illinois. The First Division Museum at Catigny Park. Says Keeney: “This is the place to honor the first American victory of WWI—the Big Red One’s victory in Cantigny, France. A recent, multimillion dollar face lift and an outdoor tank park makes this a spectacular outing for the whole family.”

Columbus, Georgia. The National Infantry Museum. Says Keeney: “The Last 100 Yards is as realistic as it gets. It’s a long walking exhibit through life sized dioramas that cover all of Americans conflicts and the WWI areas is unmatched.”

West Point, New York. The West Point Museum. Says Keeney: “You have to see the cannon that fired the first American shot of WWI – and its just up the Hudson from New York City.”

Carlisle, Pa. The Army Heritage and Education Center. “This outdoor trail is a one-mile walk through enormous, life sized WWI trenches and other recreations of actual combat scenarios. All of the conflicts are here, in a terrific outdoor setting.”

2.    The National Museum of the Marine Corps, Triangle, VA.

6.    The National Museum of the Pacific War, Fredericksburg, Texas.

Mike Henneberger Announces Pre-Order For ROCK BOTTOM AT THE RENAISSANCE