I stumbled across some clips of this tour on youtube and I am very flabbergasted. What was the primise of this show? What was it trying to accomplish? Did anyone on here get to see it? It seems like it was a special kind of awful.

As in the friendly ghost? If so, you have my attention.... 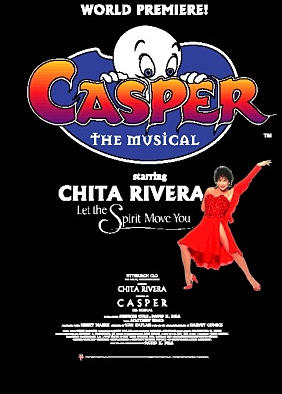 I unfortunately didn't see it, but there's a bunch of info (song clips, production photos) on the writer's website.

Chita played the Christina Ricci part. Critics said she was a little too old, but I thought she was charming.

If so that's a whole new kind of creepy cougar action.

This 2001 Playbill article has the information you need:

Special mention of The Visit. She really has been waiting a long time to perform this show on Broadway.

Hm so no relation to the film at all.

Interesting that it started here in Pittsburgh! Wish I had seen it.

I went and saw Casper in Pittsburgh. The day as a whole turned out to be a fun adventure and one I fondly reminisce with my partner. We drove out in the morning, saw the matinee, brought flowers to Chita at the stage door, mentioned that we drove in from NYC and her reply was "to see this? WHY!?", we unexpectedly stopped at a small old amusement park (Kennywood) for dinner and a few rides and drove all the way back home in the same day!

Oh, Casper, right...the musical was not necessarily the highlight of the day. We were humored that we went to see it. As expected we went because we doubted this would make it to Broadway (we weren't wrong). It was really corny. The little I remember of it...the lighting was really dark and they used blacklights to make the ghosts appear to float (since their pants and shoes were black). It sort of worked. The best number in the entire show was a tap number that had shoes (only) dancing. The rest of the performers were in black clothing. Chita was fun to see in this but it was probably a role that is even best left off the resume. It was really targeted to children. If it wasn't then they were really off the mark!

If you didn't see this...you missed nothing.

I went to see Casper the Musical and I got the t-shirt. hahaha I really did!

mentioned that we drove in from NYC and her reply was "to see this? WHY!?"

Could somewhat PLEASE direct Ms Rivera to the open letter on the main board?

I can see the critics on this one

"Doesn't have a ghost of a chance"

The book writer and lyricist of Casper, Stephen Cole, also wrote Night Of the Hunter with music by Claibe Richardson (The Grass Harp).  It had a successful production in Dallas and I wish someone would do it in NYC. It's really terrific.

Totally agree. Have the CD of the score and would like to see a full production of it.

The revised version of this musical (revised again, apparently) premiered last Halloween in Cincinnati. But look at that Playbill post: Mitch Jarvis and Gerard Canonico were among the children in the cast; Pittsburgh theatrical royalty Tim Brady and Tim Hartman played ghosts, and the child role of Precious was played by Courtney Neville, who is now well-known as Instagram influencer Young Baby Coco.