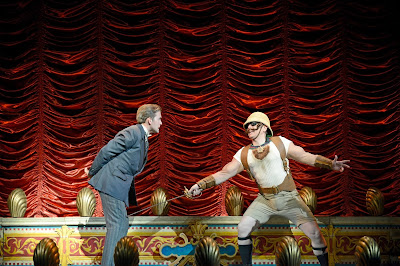 A Gentleman's Guide to Love and Murder based on a novel by Roy Horniman/book and lyrics by Robert L. Freedman/music and lyrics by Steven Lutvak/directed & choreographed by Peggy Hickey/musical director: Julie Lamoureux/3-D Theatricals/Cerritos Center for the Performing Arts/through March 3

Winner of 4 Tony Awards in 2014, A Gentlerman's Guide to Love and Murder is a devilishly clever musical sendup of the British aristocracy circa 1909. Production-wise it's a class act all the way, and for its adult audiences, it's a delicious odyssey of. nonstop laughter. Now at 3-D Theatricals in Cerritos through March 3, the infectiously broad satire will have you on the edge of your seat throughout its two and a half hours. Skillfully executed by director Peggy Hickey, who also choreographs - she was the original Broadway choreographer - and her awe-inspiring cast, it's a surefire hit.

It is rare when the first act of a show flies by. The first act not only sets up the premise, plot and characters, but here it goes beyond by providing immensely entertaining scenarios, every last one. Hickey's pacing of Gentleman's Guide has the speed of a rocket blasting into space. Actors play on a small stage framed by a larger one as well as within the larger space. It's the story of Monty Navarro (Nick Tubbs), imprisoned for murder. As he sits stage left writing his confession, it's really his diary or gentleman's guide. The action flashes back to the beginning when he finds out from Miss Shingle (Tracy Lore) that his recently deceased mother was related to the Earl of D'Ysquith, putting Monty in line for the coveted title of Earl. Most of the action plays out on the small theatrical stage and actors come down to the mainstage to comment to the audience or transition to another scene; then it's back up to the small stage, in fairly constant motion. There are no lags here.

Plotwise, what stands in Monty's way are eight other candidates from the D'Ysquith family who are ahead of him on the list to replace the Earl. All of these candidates, both male and female, are played by Jeff Skowron, who must change costume, accent and demeanor within the blink of an eye. And it becomes Monty's game to murder off every one of them, who stand in his way for fame and fortune. Monty has a love Sibella (Julia Burrows) who has another proposal of marriage in her pocket. They string each other along, even when he meets Phoebe D'Ysquith (Kelley Dorney), with whom he has an immediate attraction...for her, it's all-out love, and she proposes to him. Monty is on his way to the heart of the D'Ysquiths. He succeeds in making most of the murders appear like accidents, and at the play's semi-happy ending he is somehow acquitted, his case thrown out due to circumstantial evidence. 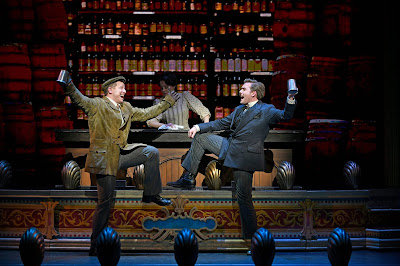 The greatest feats of humor may be tiny but they produce thunderous laughs, aided by some wonderful background projections. Reverend Lord Ezekial D'Ysquith (Skowron) leads Monty up a tower in the church and at the very top, he falls to his death... Picture it! We see his image landing against the screen with a huge red circle of blood surrounding him. It's an amazing trick of artistry that leaves one gasping and applauding. Another relative Henry D'Ysquith (also Skowron; remember he plays 8 roles!) is a bee keeper and a simple run back and forth across the tiny stage pursued by a supposed swarm of bees, which leads to his death, provokes gales of laughter. These short visuals a la Monty Python or Mel Brooks add 150% to the comedic proceedings.

Musicals do not always have great scores, but Gentleman's Guide's tunes by Steven Lutvak snd lyrics by Lutvak and Robert L.Freedman are upbeat and have fast staccato rhythms much like the songs of Gilbert and Sullivan, which is a perfect match for the rapid fire pace and satirical style of the book. Yes, the music and book blend together beautifully. "I Don't Understand the Poor" is a disarmingly funny tune where Lord Albert D'Ysquith cannot and will not bend to the lower class. Another treat is "Better with a Man" where Henry expresses latent homosexual desires for Monty.

The ensemble are magnificent triple threat performers who sing, dance - with fast and furious steps by choreographer Peggy Hickey - and act to the max. Skowron performing all of the D'Ysquith family is brilliant. He mesmerizes with his quick changes, including accent and specific demeanor of each character. Tubbs makes Monty an agile foil. It's a skilled duel and entertaining match of wits. Burrows, blonde and beautiful as Sibella and Dorney, petite and pretty as Phoebe compliment each other divinely. Tracy Lore is sheer perfection as Miss Shingle, and the rest of the cast work with a clockwork proficiency, like Jean Kauffman who plays Lady Eugenia with snobbish, poker-faced comedic aplomb.. Linda Cho's period costumes are nothing short of gorgeous, and Alexander Dodge's set design lends the perfect theatricality. Aaron Rhyne's projection design is top notch. 3-D Theatricals is the only regional theatre to retain the original sets and costumes form the Broadway production. 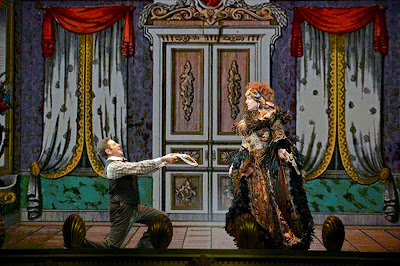 A Gentleman's Guide to Love and Murder is big, bold, over.the.top fun. It is a true sensual treat. Don't miss it! 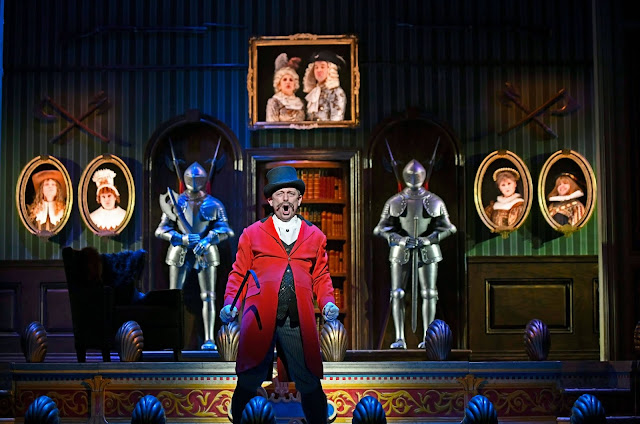 Voting Now Open For Broadway's NEXT ON STAGE Top 15