Since 2019 is over, time for the 2020 movies thread! While big films likely deserve their own threads, I think having this as a general recommendation/brief review thread will be great for us frequent movie goers. Now that I'm getting back in my stride I've slowly begun to see movies again.

- Bad Boys For Life: Okay I'm sorry, I... kinda loved it? Maybe it was the edibles, but I seriously had wayyyy more fun that I ever thought I would. Theatre was having a blast with it as well. This is the dumb fun I look for. Took itself serious enough to be a decent film but also knew when it was being ridiculous and owned it. I recommend it for a fun afternoon or evening out.

Haven't seen any other 2020 movies yet, however I'm planning to catch The Gentlemen this upcoming week. Have heard its quite fun so looking forward to it. Then on Thursday, Birds of Prey!!!! Looks sooooo bad ass and pure fun I cannot wait.

Iâm in the minority who really liked The Turning.

Bad Boys For Life was a chore for me to sit through. I considered leaving early but stuck it out in hopes of some sort of redemption. A redemption never came.

The Rhythm Section was nothing special. Blake Lively gave a decent enough performance, but the film did nothing for me.

Underwater was disappointing for me as a massive fan of sci-fi and horror. It missed all the marks that wouldâve made it work.

Like A Boss - I couldâve lived a very happy and healthy life never having seen that.

I know 1917 technically came out at the end of 2019, but it wasnât released in my city until January, so Iâm in including it here. I loved it. The screenplay has issues, but itâs a cinematic marvel.

The Gentleman: what a cracking story, enjoyed every single thing about it .

Bombshell : was only released in Australia in January, three stunning actors at the top of there game, liked it a lot.

Underwater : what a soggy waste of time

Dolittle : it’s not great, it’s not bad , it just didn’t need to exist

TheGingerBreadMan
Profile
Broadway Legend
joined:12/7/12
Broadway Legend
joined:
12/7/12
2020 Movies #4
Posted: 2/2/20 at 1:44pm
Saw Gretel and Hansel last night. I hated it. The dialogue came off like a high schooler BSing an essay to reach the word count. Nothing about it was remotely scary. I liked Sophia Lillis in It, but she was really phoning it in here. I hope that itâs a case of her being directed badly because she really showed some potential in It and I donât think sheâs a bad actress.

Friend did not want to see The Gentlemen so we went for The Rhythm Section ( I think he just wanted to go for Lively), couldn't agree more that the film offered nothing for me. The action sequences were well done but everything other thing in this film just fell totally flat for me personally. Can't say much more than that to be honest.

Really hoping to catch The Gentlemen this week, seems fun.

I'm really disappointed in myself that I haven't seen any movies yet this year.

"They're eating her and then they're going to eat me. OH MY GOOOOOOOOOOOOOOOOOD!!!!" -Troll 2

spiderdj82 said: "I'm really disappointed in myself that I haven't seen any movies yet this year."

I wouldn't be, January is usually a dumping ground minus late nationwide release like 1917 and Just Mercy. Other than that I wouldn't say you've missed much. If you thought the Bad Boys trailer was fun it translates well to the film itself. The Turning and The Rhythm Section id say are worth skipping, even if you're like me and have AMC A-list. The Gentlemen seems fun however and I'm excited for that one this week. Other than that, Birds of Prey comes out on Friday which should be fun. February doesn't have a ton that interest me either past The Assistant, Downhill, The Photograph, and Portrait Of A Lady On Fire. Hoping films like Buffaloed and After Midnight get decent wit releases as well.

TheGingerBreadMan
Profile
Broadway Legend
joined:12/7/12
Broadway Legend
joined:
12/7/12
2020 Movies #8
Posted: 2/3/20 at 10:41am
I saw this yearâs Oscar nominated live action short films last night. I loved Nefta Football Club - thatâs definitely my pick. Saria and The Neighborâs Window both moved me a lot. I didnât care much for Brotherhood or The Sister.

I really liked all three movies I saw today, but surprisingly I probably liked Joker the most. Partially because I like movies that are character studies. Partially because I went in with the lowest expectations for it and it surpassed them. Partially because I worked as a mental health professional in a adult make prison for almost 24 years. But mostly for two reasons: it’s the first superhero (well, in this case, anti-hero) movie in forever that wasn’t as if it was assembled on an assembly line with more care to CGI than the script and it played for the most part true to the rules of the reality it was set in. Joaquin definitely deserves that Oscar Sunday night.

With Parasite, there were a couple moments towards the end that I thought broke the rules of the reality it was set in. Just not totally believable. I do think it explores the ways society treats the marginalized in a more nuanced way than Joker does.

1917 is stunning in many ways, but I found it pretty unbelievable that one character could survive all that.

Watching Judy on On Demand now.

I’m pulling for Once Upon a Time in Hollywood and Quentin Tarantino to win big tomorrow night. I do wish Toy Story 4 had gotten a nomination for Best Picture.

All movies I’ve seen that are nominated for best picture would be part of my top 10 movies released last year.

Today did remind me that how much I miss seeing movies in the theater as opposed to on a plane.

Birds of Prey , while Harley Quinn was the most interesting character in the purely awful Suicide Squad. Sadly in her own feature film nothing works, it’s not bad , it’s not awful.  It’s just nothing, a story that’s all over the place , a mess of a film , that’s just well......

Sonic :  nothing groundbreaking, nothing too special , but it was what it was , slightly enjoyable

Downhill :  if someone could please explain why this movie needed to exist, awful , dull and pointless

The Rhythm Section: yet another pointless dull movie , that starts off stupid and gets dumber every minute it’s on screen

ColorTheHours048
Profile
Broadway Legend
joined:4/4/08
Broadway Legend
joined:
4/4/08
2020 Movies #12
Posted: 2/14/20 at 8:09am
The Lodge: I didnât hate it, but I canât recommend it to anyone unless youâre a glutton for punishment. Itâs humorless and oppressive to the point of tedium. Saw the real twist coming the minute they started telegraphing the first twist. Didnât care about any of the characters except that poor dog. Itâs basically Diet Hereditary.

I saw a good horror/comedy yesterday called Come to Daddy. It had Elijah Wood and was a lot of fun.

I also saw Underwater, which was dumb but entertaining. I hated The Gentlemen and the less said about The Grudge the better.

Iâm super behind on movies at the moment but going to catch up in the next couple days.

I don't know why putting a pair of glasses on a gangster changes how I think about the character, but it does. I can't even really put my finger on what it is that changes (more "well-read"? more "refined"/less "ghetto"?, more "father/grandfatherly"? more ironically "vulnerable"?). For some reason, if you costume a gangster with a pair of glasses, I'm more drawn to the character... 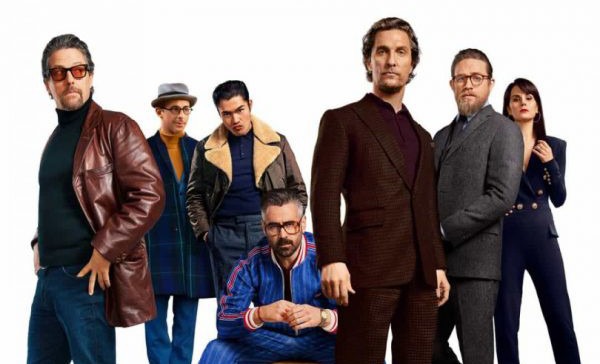 TheGingerBreadMan said: "I saw this year’s Oscar nominated live action short films last night. I loved Nefta Football Club - that’s definitely my pick. Saria and The Neighbor’s Window both moved me a lot. I didn’t care much for Brotherhood or The Sister. "

I didn’t think any of them were very good. A Sister was my favorite just because I found it the most moving but there wasn’t much to it and it was very similar to a feature length film that came out a couple years ago. Nefta was basically just a long set-up for a cute sight gag. Last year’s crop of short films was much stronger, I thought.

I've been looking forward to Disney/Pixar's Onward for a very long time. I'm getting happier knowing that it's finally just around the corner...

VIDEO: Go Backstage At Of COME FROM AWAY In The First BroadwayWorld Behind-the-Scenes Vlog

Opera: The Metropolitan Opera Has Announced its 2020?21 Season