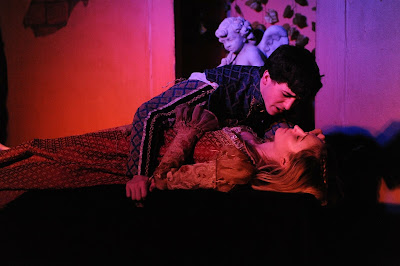 On Sunday March 19 I paid a visit to Archway Studio Theatre in Burbank for the matinee performance of Romeo and Juliet. It was the last performance and my very first time at Archway, who are known mainly for their presentation of the classics. Needless to say, I was blown way by the production, the direction and the entire ensemble who all invested themselves so dearly in their roles.

Since everyone, or most everyone read Shakespeare's classic in high school, I will not concentrate on plot elements here but rather the performances. Steven Sabel, artistic director, directed with a finesse and style superior to what is normally seen in Equity waiver theatre. His pacing was fast and the staging quite miraculous for such a small space. 14 actors made their exits and entrances from the aisles of the audience as well as from stage left and stage right. All entrances and exits were crisply executed.

Under Sabel's dextrous hand, the cast one and all gave energetic and full-blown performances as one would expect in Shakespeare, but, of course, some stood out more than others. Will Holbrook as Romeo did astounding work, intensely focused and emotionally on target throughout. The balcony scene where Romeo nervously awaits Juliet's attention and reaction to his presence below was such fun to watch. Like children in a candy store for the first time, Kei'la Ryan (Juliet) and Holbrook literally devoured each other in the love scene, one of the best I have seen to date. Banks Boutte as Mercutio and Drew Petriello as Benvolio, Romeo's buddies, were fantastic comic foils for Romeo's lovesick bewilderment and when the three actors cavorted on stage together, they literally set the scene ablaze. Of the older actors, Melissa Virgo as Juliet's Nurse was divine. Big, broad and full of passion, she lit up the proceedings whenever she hit the spotlight. Also outstanding was Eric Castro as the resourceful and cunning Friar Laurence. John Eddings as Lord Capulet presented a memorably strict and unforgiving paternal image. In Shakespeare, the actor never fears going over the top for that style is expected, so the great emotional outbursts from the entire Capulet family upon finding Juliet supposedly dead in her bed were ample and totally fitting. It was great fun as well to see a page boy played by a female actor, as was the case in Shakesperean times.

Costumer Sara Davenport did lovely work with the colorful period attire, and Sabel and Eddings designed a minimal but functionl set with a tiny Cupid statue stealing attention in the foreground.

Archway are to be commended for this fine production of Romeo and Juliet. Go out and support them when you can. I know I'll be back. 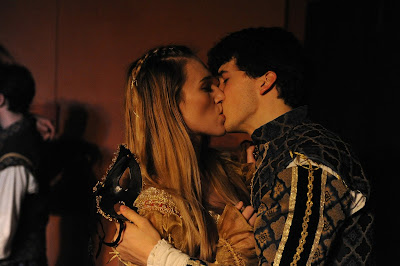 Readers Name The Musicals That Should Be Revived In The 2020s!

Quiz: Test Your Knowledge Of Broadway In The 2010s!