BWW Review: Actors Co-op Honors A MAN FOR ALL SEASONS

If the laws are changed for convenience, who will object to money, favors or a higher position? When you think about it, the issue is timeless.

In the 16th century, King Henry VIII (Ian Michaels) divorced his wife Catherine, who could not give him a son, and married Anne Boleyn. He was excomunicated from the Catholic Church by the Pope of Rome. The Anglican Church resulted and Henry's power became supreme in England. Spain, who had conducted the Inquisition, looked upon England with disdain. Anyone under Henry's command, who had signed an oath accepting the changes, stood to benefit in convenient ways. For example, Master Richard Rich (Mitchell Lam Hau) moved up the ladder and betrayed his mentor and friend Sir Thomas More (Bruce Ladd), who had offered him sound advice about becoming a teacher and staying honest. Under oath, Rich lied about More, who was accused of treason, and More went to the gallows, despite pleas from his family to sign the King's oath and keep his beliefs in silence.

More, obsessed with conscience, confessed that he owed obedience to the King ... but first, to God. And he refused to compromise, dying for his belief that the ruler, as he stood before God for his final salvation, would pay for his indiscretions. In Robert Bolt's brilliant play A Man For All Seasons, the playwright does not portray More as a martyr but rather as an intelligent scholar who stood for what was right. The bulk of King Henry's men lied, stood falsely by him and accepted him for their own gain. Sound familiar? Currently onstage through April 15 at Actors Co-op, A Man For All Seasons is a perfect play choice for this season, as our current government parallels its issues almost to the letter. We have a tyrant in power and the Republican forces in Congress will not budge to impeach him. It is sad that those who deserve to pay for their disloyalty have not, at least so far. 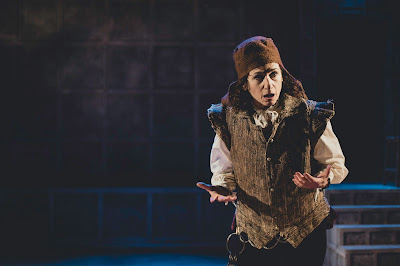 Under Thom Babbes excellent direction, Actors Co-op's ensemble are sterling from top to bottom. Ladd as More gives a brave and consistently powerful performance. As Lady Alice, More's wife, Treva Tegtmeier wears every emotion on her sleeve and never pulls her support away from her husband, as is the case with daughter Lady Margaret, played lovingly by Elsa Gay. A wonderful standout in the cast is The Common Man, who introduces the plot as narrator and plays More's servant Matthew. As in Shakspeare a female actress plays a male role and does it with fierce intensity, an almost arrogant sense of self. Deborah Marlowe is simply stellar, never making a false move. John Allee also shines as Thomas Cromwell. Cromwell makes it his business to destroy More. He is a cunning villain, and Allee provides lots of edge. And last but hardly least, in one scene, Michaels steals it as King Henry VIII. He plays the role with great devious relish, and is such fun to watch. His costume in black leather - all costumes wonderfully designed by Shon LeBlanc - is off.color delicious and different, a perfect and unusual choice for a blatantly flamboyant tyrant.

Don't miss A Man For All Seasons! It leaves you with much to think about at the final curtain. And...Actors Co-op has achieved the best possible production of Bolt's astounding play. 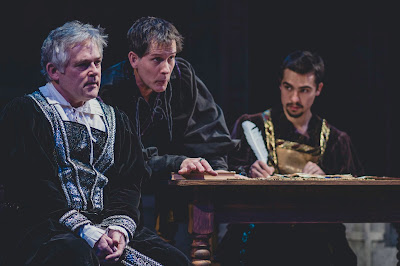 NOISES OFF Opening At The Long Beach Playhouse

TWISTED BROADWAY 3 Comes to Feinstein's at Vitellos This March

Philadelphia: Check Out Exclusive New Designs In The Theatre Shop