Elizabeth Taylor Collection Will Be Going up for Auction

After being captivated while watching the epic 1963 Cleopatra for the first time, Allan Trivette began an over 50-year quest passionately collecting artifacts from the life and career of the legendary Elizabeth Taylor. Through intrepid perseverance, Allan assembled the finest collection of Taylor movie costumes, props, and ephemera in private hands

Elizabeth Taylor's "Tarsus Arrival" teal gown and headdress from Cleopatra. This gown is highly visible when worn for the spectacular arrival of Cleopatra (Taylor) in Tarsus upon her fabled barge. It's pictured left and estimated to sell for $25,000 - $35,000.

Elizabeth Taylor's lavender gown with test headdress designed by Irene Sharaff from Cleopatra. The gown, worn under a matching robe, is visible in the Alexander's Tomb scene when Cleopatra (Taylor) reveals her pregnancy to Caesar (Rex Harrison). Estimated to sell for $8,000 - $12,000.

Elizabeth Taylor's "Entrance Into Rome" gown with elaborate replica headpiece from Cleopatra. This costume was designed to represent the living embodiment of the goddess "Isis" and is highly visible in the film's unforgettable scenes when Cleopatra (Taylor) enters Rome, 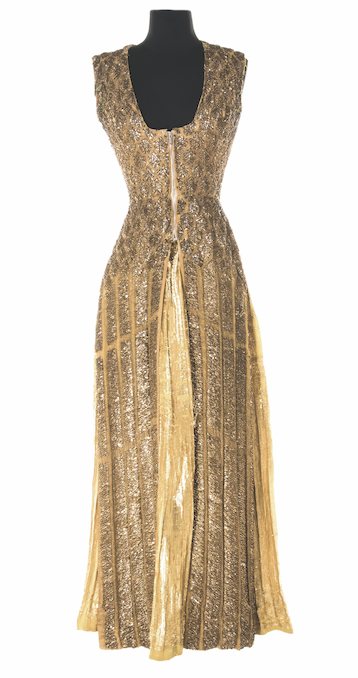 as well as the final scene when Cleopatra lies in state upon the sarcophagus in her tomb.It's pictured right and estimated to sell for $20,000 - $30,000.

Elizabeth Taylor's coral gown by Irene Sharaff from Cleopatra. This costume is visible in the scene preceding Cleopatra's (Taylor) entrance into Rome, where she begins to manipulate the narrative of being "invited" to attend Caesar's (Rex Harrison) being named Emperor. Estimated to sell for $8,000 - $12,000.

Elizabeth Taylor's "Ruth Wiley" ivory and lavender gown by Edith Head from Elephant Walk. This gown is highly visible in the scene where Ruth (Taylor) plays hostess to her first party as the new mistress of Elephant Walk. Estimated to sell for $3,000 - $5,000.

Elizabeth Taylor's "Ruth Wiley" riding costume designed by Edith Head from Elephant Walk. This costume is highly visible in the pivotal scene when Dick Carver (Dana Andrews) confesses his feelings for the married Ruth (Taylor) at the temple of the Sleeping Buddha Of Polonnaruwa. Estimated to sell for $2,000 - $3,000. 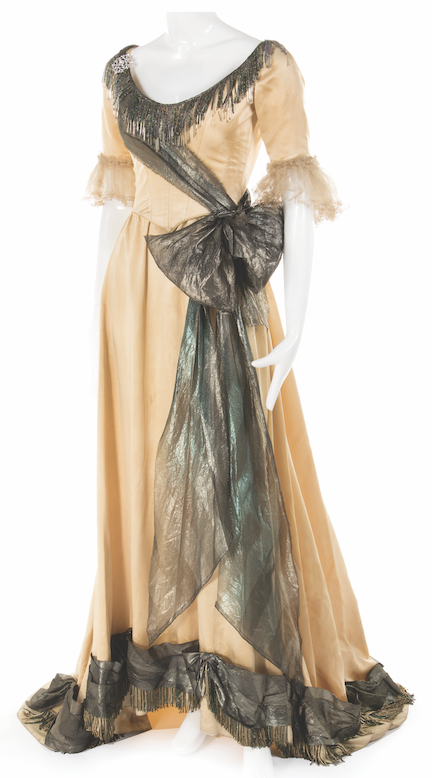 designed by Elizabeth Haffendon from Beau Brummell. This gown is highly visible in the banquet scene when Beau Brummell (Stewart Granger) removes Lady Patricia's (Taylor) earrings declaring, "You shouldn't wear earrings. Never embellish what is already perfect". It's pictured left and estimated to sell for $4,000 - $6,000.

Elizabeth Taylor's "Susanna" floral gown and matching shoes from Raintree County. This gown is visible when Suzanna (Taylor) frees her black slaves during a party she and Johnny (Montgomery Clift) are hosting. Estimated to sell for $4,000 - $6,000.

Elizabeth Taylor's custom MGM studio dress form. This is a vintage original wardrobe department dressmaker's form consisting of padded foam-filled cloth "skin" with ribbon and metal components over wooden substructure. It was made to replicate Taylor's precise physical measurements with some tailor's markings in grease pencil and graphite in areas. Estimated to sell for $800 - $1,200.

A pair of screen-used Egyptian-style cat statues from Cleopatra. They were also seen in Julie Newmar and Eartha Kitt's "Catwoman" lairs in the Batman TV series. Estimated to sell for $2,500 - $3,500.

Elizabeth Taylor's costume dagger from Cleopatra. It's pictured right and estimated to sell for $1,500 - $2,500.

Elizabeth Taylor's pink nightgown by Irene Sharaff from Cleopatra. This nightgown is visible in the scene where Cleopatra (Taylor) and Julius Caesar (Rex Harrison) are in bed when she tells him, "I will have many sons. Isis has told me." Estimated to sell for $6,000 - $8,000.

ABOUT PROFILES IN HISTORY

Founded in 1985 by Joseph Maddalena, Profiles in History is the world's largest auctioneer & dealer of original Hollywood Memorabilia, historical autographs, letters, documents, vintage signed photographs and manuscripts. Born into a family of antiques dealers in Rhode Island, Joseph "Joe" Maddalena learned early on how to turn his passion of collecting historical autographs into a career. Upon graduation from Pepperdine, Joe pursued his passion to become a full-time dealer of historical documents, and opened his first office in 1985. Profiles in History has held some of the most prestigious and successful auctions of Hollywood memorabilia and own virtually every Guinness Book record for prices of original screen-used memorabilia. Highlights from their previous auctions include the "Cowardly Lion" costume from The Wizard of Oz for $805,000; Steve McQueen's "Michael Delaney" racing suit from Le Mans for $960,000; From the history-making Debbie Reynolds Auction in June 2011, Profiles in History sold the Marilyn Monroe "Subway" Dress from The Seven Year Itch for $5.52M and the Audrey Hepburn Ascot Dress from My Fair Lady for $4.44M. In February 2012, Profiles in History arranged the sale of a pair of Judy Garland screen-used Ruby Slippers from The Wizard of Oz to the Academy of Motion Picture Arts & Sciences. In June 2017, at his Hollywood Auction 89, Joe sold the Gary Cannavo collection of Battlestar Galacticaspaceships for 1.8 million dollars, the Saturday Night Fever dance floor for 1.2 million and an R2D2 for 2.76 million. In May 2018, Joe sold the Big Book of Alcoholics Anonymous for 2.4 million. In addition, Joe Maddalena was the star of Hollywood Treasure, which aired on Syfy. Hollywood Treasure took viewers into the fascinating world of showbiz and pop culture memorabilia.