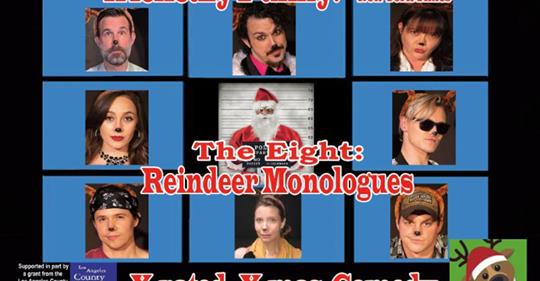 Important to note right from the start ... Jeff Goode wrote The Eight: Reindeer Monologues back in the early 1990s around the time of the Clinton administration. The vehicle was his way of speaking out on a number of political issues. Maybe the sex scandal of Bill Clinton? Taking Santa Claus and Mrs. Claus, who are revered as two of the most benevolent fantasy characters of all time, and gossiping about their bouts with sexual harrassment and alcoholism, turns them into pretty despicable people. But when you are that good and held up as a model of perfection, something's gotta give. Everyone has flaws, and Goode has his reindeer take them to the extreme.

In structure the play presents monologues in a straightforward fashion by Dasher (Neil Unger), Cupid (Michael Mullen), Prancer referred to as Hollywood (Michael Marchek), Blitzen (Kimberly Patterson), Comet (Eric Keitel), Dancer (Valerie Lynn Brett), Donner (Jeff Witzke) and Vixen (Megan Cochrane), who are either defending the big boss or accusing him of perpetrating "holly jolly sex crimes". The first few are light and whimsical. For example, Hollywood presents himself as a flamboyant movie star who is into the whole political show business scene. It's who you know that gets you cast. Your contract is financially demeaning. He cites Bambi as never getting an Oscar nomination: Hollywood has been unfairly cruel to animals. But it's all delivered wih tongue in cheek, and we laugh big time. Then, as the play progresses, the monlogues get heavier and more serious. Comet in true Brando style idolizes Saint Nick for keeping him and other wayward, drug addicted reindeer off the streets, whereas Donner decries Santa as a degenerate and Vixen as well, who accuses him of rape.

Under director Bill Reilly's even pacing and smooth staging, all the actors have their turn to shine in the spotlight. Mullen, as usual, is over.the.top fun as the gayest Cupid you may ever see, Keitel makes Comet truthfully passionate and sincere. Cochrane and Brett in their disparate deliveries, steal the hour: the latter with her somewhat gentle and naive nature and the former with an alluring sexual flair that increasingly tones down, when she faces that the odds are against her. And Witzke's brave Donner who is in deep emotional pain for allowing Santa to abuse his son Rudolph for pay is a knockout ...

The Christmaslike set by Joanne Lamb is just right, without going over the top. Costumes by Michael Mullen are also fun to look at, casual, not overdone.

Go and catch The Eight: Reindeer Monologues and really listen. It's amazing how well this little play mimicks our world right now. The big boss in our country is accused of many horrible actions. Some followers despise him while others follow behind him wagging their tails and laughing, without looking for malevolent consequences. The play is totally symbolic of an unsettled world, and I could not stop thinking Orwell's Animal Farm in which the creatures also resemble rebellious humans in word and deed. 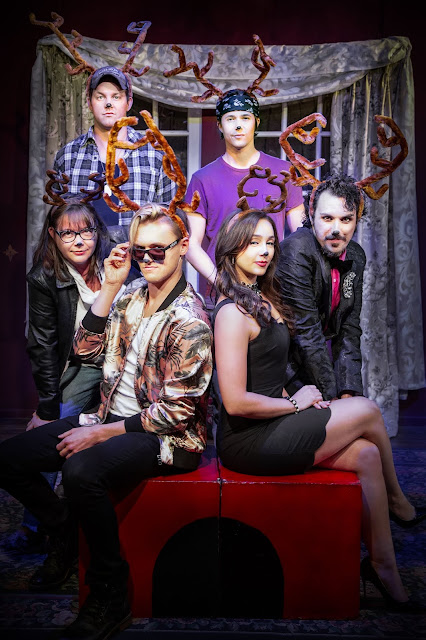 *Plays Thursdays at 8 pm, Fridays and Saturdays at 11 pm, Sundays at 7 pm