Just a warning to those who think that Lady Day at Emerson's Bar and Grill is a musical revue of Billie Holiday's greatest hits. Lanie Robertson's work is a very heavy play with music featuring brilliant Deidrie Henry front and center baring her soul in one of Holiday's last performances in 1959 before her death. Incredible musicians Abdul Hamid Royal as musical director and as Jimmy Powers at the ivories and James Leary on bass add immense flavor to the evening, currently onstage under the outstanding direction of Gregg T. Daniel, at the Garry Marshall Theatre through June 2 only.

The time is 1959 in Philly at Emerson's where Billie Holiday in declining health makes her way onto the stage ever so slowly, fills herself with booze and drugs, sings an occasional song and lives out her memories, mostly wrenched with pain and acute suffering. This is a powerhouse role for the actress playing Holiday and Deidrie Henry is certainly up to the challenge. She moves, utilizing every part of her body, talks and sings like Holiday, making every second count in a painting that is at once harsh for an audience to view and...ever so richly entertaining. Lanie Robertson has cautiously constructed the script so that Henry as Holiday can realistically take her time to segue from one moment to the next. She talks to her pianist Jimmy Powers, sometimes forgetting where she is and calling him Sunny (Jimmy Monroe), the man who got her addicted but with whom she shared the utmost love. She talks about Sunny, about her mother the Duchess, who had a generosity of spirit except when it came to Sunny. She warned her daughter that he was blacker on the inside and would destroy her.

Holiday spent time in jail for drug addiction, considered a racist tactic, and one of my favorite stories is when she toured with white band leader Artie Shaw who was very kind to her. She had to stay in the kitchen and one night when she could hold her bladder no longer, and because she was denied access by the female manager to the restrooms, she let it rip and peed all over the bitch's sequined shoes. Many referred to Billie's secret weapon. She was unapologetic and for standing up for herself, she should be lauded. Another attribute is Billie's admiration for Bessie Smith, the mother of the blues. She calls herself a jazz singer, but owns up to her vocal limitations. 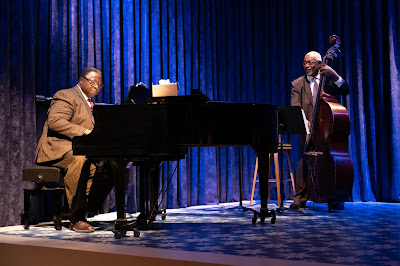 Holiday's signature songs like "God Bless the Child", "What a Moonlight Can Do", "Strange Fruit", "Crazy He Calls Me" and "Taint Nobody's Bizness If I Do" are all featured in the play. Tanya Orellana is credited as scenic consultant. The club is represented by a fine design incorporating audience members onstage at various tables, and Michele Young's costume design, particularly Henry's lovely white gown replete with long white gloves and gardenias, is spot.on.

In spite of the sadness of the evening with Lady Day's sudden outbursts and inability to go on, causing her to leave the stage, she does indeed go on and finish the show...something that defines performers of that era. Think of Judy Garland! They gave everything they had + to each performance. They paid for it by dying young, but gave audiences the overabundant entertainment and joy they wanted.

Don't miss Lady Day! You will be moved by Gregg T. Daniel's vibrant direction, by Deidrie Henry's astounding work as both actress and singer and thoroughly elated by the superb musicianship of Abdul Hamin Royal and James Leary. Oh, there's also an adorable dog Pepi played by Ezer. 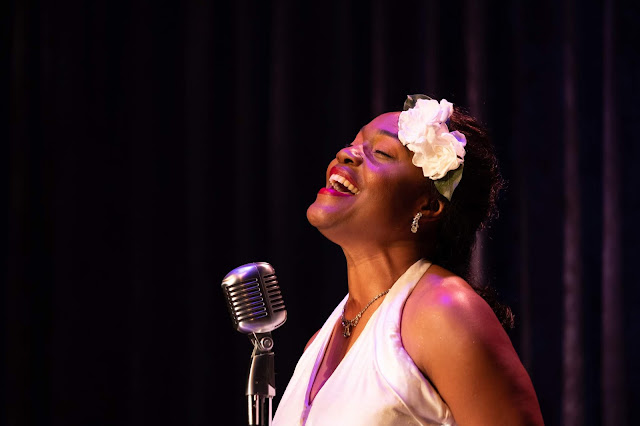 LAO AT HOME Announces Events for the Week of July 13