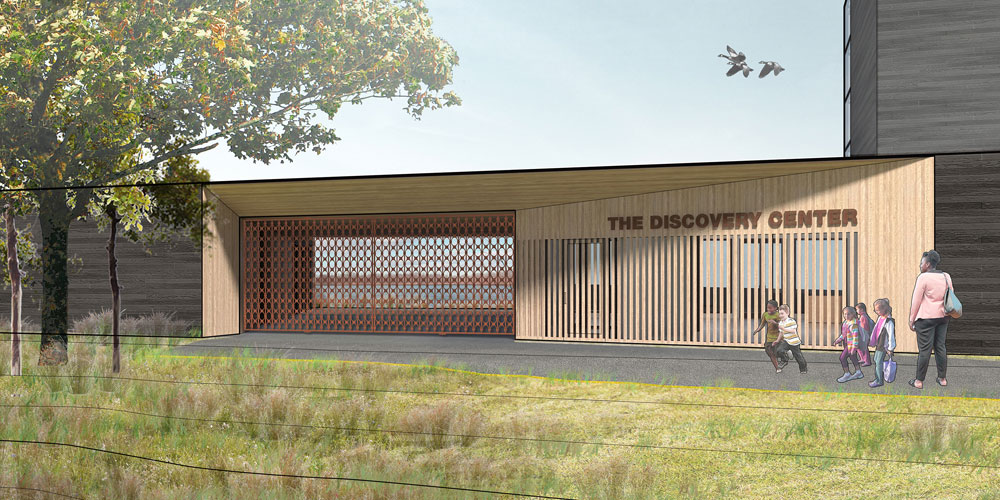 The Office of Arts, Culture, and the Creative Economy's Percent for Art Program is pleased to announce a new site-specific public art commission at the Discovery Center by Philadelphia-based artist, Warren Holzman.

Blacksmith and visual artist Warren Holzman will create a unique forged steel gate that celebrates the landscape and the architecture. Mr. Holzman is a master iron-worker who often uses a traditional technique called forging to fabricate intricate and ornamental patterns. His gates will serve as the aesthetic centerpiece of the building, while still complimenting the surrounding natural setting. On it's aesthetic, the artists states:
"The gates will be comprised of a single repeating motif that when closely inspected alludes to common forms found in and around the Reservoir varying from biological to botanical and ornithological. When viewed as whole, the interlocking forms transform singular units into a greater whole as a subtle nod to the Discovery Center's collective effort between the community, the Audubon Society, Outward Bound, and the City of Philadelphia." The Discovery Center is a new park project in the Strawberry Mansion section of Fairmount Park, which will serve as Philadelphia's premier environmental education center. Located on the banks of the the decommissioned basin of the East Park Reservoir complex, the park will consist of 37.6 acres of lake and 12.4 acres of natural land. Anchored by a building of the same name, the Discovery Center will serve as the local offices for two major organizations: the Philadelphia Outward Bound School and the Pennsylvania Chapter of the National Audubon Society. Together, they will facilitate nationally-recognized environmental education and leadership programs, with 25,000 anticipated yearly visitors. Stewardship of the Discovery Center will come from the newly formed East Park Leadership and Conservation Center. DIGSAU Architects designed the building; Ground Reconsidered and Hillworks designed the landscape.