Steven Dietz's play, Bloomsday, which made its debut at the Elite Theatre Company in Oxnard January 17, is a Twilight Zone-like story that mixes past and present, using James Joyce's novel Ulysses as a means to an end. The play, produced by Transport Theatre, stars a quartet of remarkable actors playing two characters at two different stages in their lives, as they deal with their feelings regarding a romance that might have been. Wistful, charming, romantic, and ultimately sad, Dietz's story makes us think about similar occurrences in our own lives - and face it, we've all had them - about roads not taken.

One doesn't have to have read Ulysses to understand the plot, although it does serve as a formal guideline as to how Robbie and Caithleen first met. Caithleen is a young Irish tour guide, leading tourists to sites in Dublin that represented scenes in Joyce's novel. Superstitious about having thirteen in her party, she recruits the first person she sees, Robbie, a 20-year-old American, abroad for the first time, and talks him into joining the tour as the 14th member. One by one, the others in the tour group peel off to explore Dublin on their own, leaving Caithleen and Robbie alone together. They start revealing themselves to one another - naive, sweet, and tentative, as most budding relationships begin. They visit the locales depicted in Ulysses, buy soap where the character Molly Bloom does and eat sandwiches at a Dublin cafe. Although they are attracted to one another, their tentativeness leads them nowhere and they end up parting.

As the play opens, an older Robbie, now Robert, chides his younger self for not being more forward in starting a relationship with Caithleen, while Caithleen's elder self, who now calls herself Cait, does the same. Both have become cynical, older versions of their idealistic younger selves and try to warn their counterparts about what was to come in their future and how to avoid it. "There's plenty of fish in the sea is hogwash," Robert tells Robbie. "We only get this one chance." But Robbie ignores him. 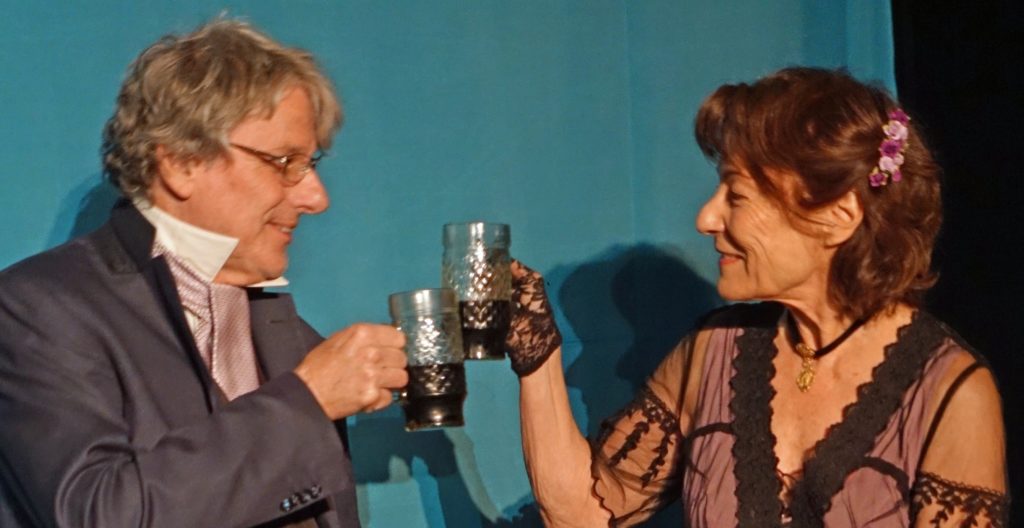 As in The Twilight Zone, Robert and Cait learn that you can't change history, but they have a bittersweet reunion during the annual Dublin "Bloomsday" festivities, during which James Joyce fans dress in costumery from 1904 to celebrate his life. To add to the wistful sadness of their lives, Cait reveals something about her recent past that lends an aura of tragedy and an unexpected twist to the story. Could this have been avoided if she and Robbie had made a go of their romance so many years before?

One of the lines in Bloomsday states, "A sunny day is nice, but a rainy day is nicer when you ache for that sunny day." This sums up the bittersweetness that makes Bloomsday, with its outstanding four-person cast, a memorable theatrical experience. Linda Livingston and John D. Reinhart play the older versions of Robert and Cait while the youthful Chandra Bond and Trent Trachtenberg play their younger selves, Caithleen and Robbie. Each of the four fully understands their characters in both periods in their lives: the innocent vs. the jaded, the romantic vs. the cynical. In this beautifully acted, tender story of love and regret, we end up not only mourning for the romance that never fully formed between Caithleen and Robbie, but also for ourselves.

Bloomsday plays through February 2 at the Elite Theatre Company in Oxnard. For dates and show times, see the VC On Stage Calendar.

From This Author Cary Ginell

Join the BroadwayWorld Book Club with THE UNTOLD STORIES OF BROADWAY Vol. 1 and Discuss with Jennifer Ashley Tepper

Industry: The College Showcase Must Go On (Virtually!) - Part 16