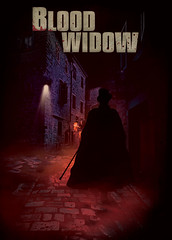 The vampire thriller Blood Widow will see a DVD release this February 4th. Already released on Digital platforms this past January 15th, Blood Widow brings a serial killer to a small Arizona town. But, this killer is fanged and immortal! Blood Widow is a film from director Brendan Guy Murphy (Limbo). And, this indie title stars: James Craven (Tuscaloosa), Dallas Thomas (Wastelander) and stage actor Hector Ayala. A preview of the film's upcoming DVD launch is hosted here.

In the story, a clan of vampires has been reduced to just one. Desperate, this sole remaining predator is preying on women, in Tucson, Arizona. Detective Valentine (Craven) and Stokes (Thomas) are hot on the killer's trail. But, this nightstalker is determined to spill more blood on the streets and spread a dark cloud across this terror filled city.

Also known as Viuda de Sangre, Blood Widow will be available next month, on DVD. A film for fans of vampires or horror, Blood Widow promises a great time spent with the denizens of the dark. Indican will also show Blood Widow in theatres across the U.S. this month, in: Texas, New Mexico, and California. Check your local listings for a vampire thriller that few will forget!

The film's official synopsis: A serial killer is terrorizing Arizona with the police in hot pursuit. What the police don't know is that a mysterious, ancient clandestine group is also pursuing the same killer! But to what end? From Vampires to Biblical wrath - everything comes down to one showdown!

VIDEO: Watch a New Trailer For This Sunday's WESTWORLD

From This Author Movies News Desk

Lin-Manuel Miranda Shares Update on IN THE HEIGHTS Film