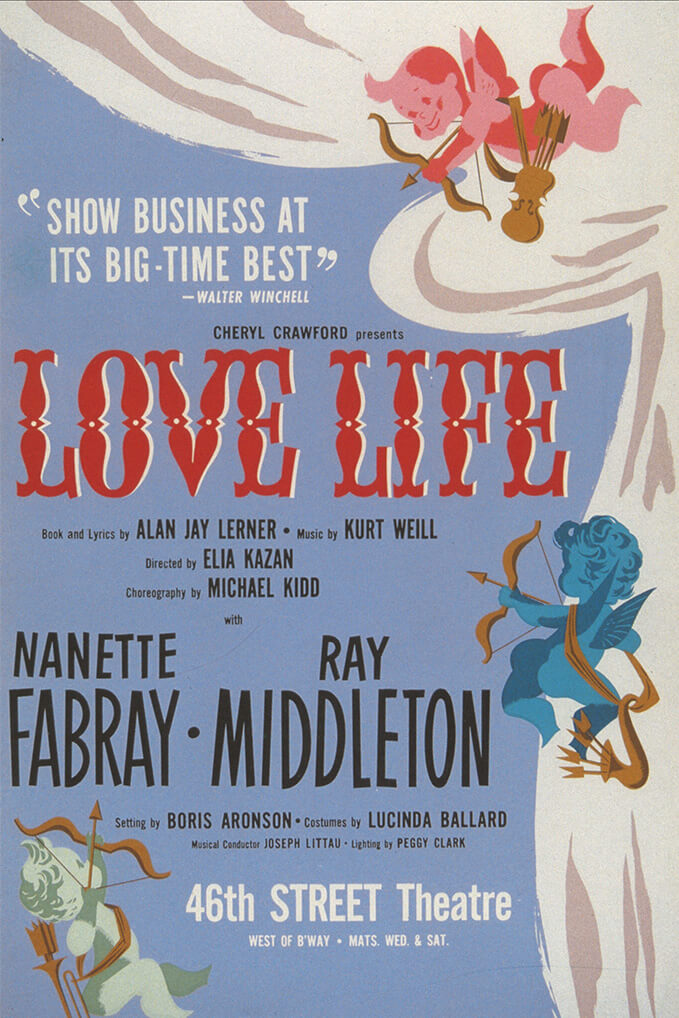 Sadly current events killed Encores! production of LOVE LIFE, which would have had its final performance today, but why not celebrate it regardless.

Opening in October 1948, the show was a collaboration between Kurt Weill and Alan Jay Lerner and pioneered the concept musical format later utilized in shows like FOLLIES and CABARET, with vaudeville numbers intercutting and commenting on a sweeping story of American disillusionment from colonial times through the then-present of 1948. Weill's score reflected the periods in which various scenes were set, and the changing mood from idealism to cynicism. The cast featured Ray Middleton and Nanette Fabray (who netted a Tony for her performance) as the central couple, with direction by Elia Kazan and sets by the great Boris Aronson.

Sadly the score has never received a proper recording, not even a set of 78s in 1948, but has remained popular among theatre buffs and Weill fans even spawning a few hits including the gorgeous "Here I'll Stay."

I really hope Encores commits to doing LOVE LIFE again in a future season. It's a fantastic score, too rarely heard and not likely to be revived elsewhere.

I totally agree. Either part of a later season or as a special one off event. Perhaps the cast can't be the same but it would still be a joy.

They could put it in next season...I guess we will see what the future brings...They are cancelling the rest of this season.

I saw it many years ago in somewhat staged performance in Philadelphia, with Debbie Gravitte and Richard Muenz. It was scheduled to be recorded with that cast but never came about. And as I understand it, the original production wasn't recorded because of a musicians' strike at the time, which also stopped a recording being made of WHERE'S CHARLEY?, the Frank Loesser show with Ray Bolger.