ETA - Come to think of it, I guess at some point when I was really young I must have assumed that Madame Armfeldt used a wheelchair because she was paralyzed and not because she was just old.

ljay889
Profile
Broadway Legend
joined:8/4/04
Broadway Legend
joined:
8/4/04
A little night music original production information#55
Posted: 1/10/10 at 1:12am
Odd. I'm not saying you're wrong. But I've definitely read members on ATC recollecting when Gingold stood up for part of the number. Maybe they tried it out at one point?

And of course, there was the infamous first preview "Liaisons" with the ill-fated bathtub.

PalJoey
Profile
Broadway Legend
joined:3/11/04
Broadway Legend
joined:
3/11/04
A little night music original production information#59
Posted: 1/10/10 at 7:05am
The initial poster there says: "In her autobiography "How to Grow Old Disgracefully" Miss Gingold discusses getting out of her wheelchair during the London calls to prove to those in the audience who may have come to doubt it, that she could still walk."

That was my memory. But then another poster wrote:

"Madame Armfeldt immediately appeared at the proscenium with a cane, and performed the song slowly walking across the entire apron. I believe the original concept was that Madame Armfeldt is all-seeing and all-knowing (as evidenced by her line "The smile for the fools was particularly broad tonight," although she wasn't present for the events that inspire the line -- she's all-seeing, all-knowing).

"...I believe she sat down in the wheelchair waiting stage left just a few lines before the end of the song, thus to drift to sleep"

and I went "Ahhh..." and I do recall a sort of Bataan Death Watch in one, from one side of the stage to the other. So it wasn't about suddenly being able to walk. she was singing from inside her head, if that makes sense...the audience still knew she was unable to walk.

The interesting thing about the show and how the song as used in the show is that the point was that what she was saying was commenting critically on what Desiree and Frederik were doing, even though we were happy that Desiree and Frederik were actually doing it. That's so Sondheim: to make you feel good that they're having sex, then have a character sing about how that's part of what's wrong with the world.

It was clearly being performed in a Sondheimian world, both in the action and commenting on the action, but it was in no way about Mme. Armfeldt's mobility.

And though I remember her performing the number in the wheelchair, when I watch the Regina Resnick video, it seems wrong. I thought that was just my disappointment that it was Regina Resnick and not Hermione Gingold, but I think I also miss that staging, which made her like a ghostly figure, sleepwalking or something, and lamenting the changes in the world.

Nevertheless, she STILL kicked her leg up in the curtain call, to let us know she could really walk.

Jose
Profile
Broadway Legend
joined:7/23/03
Broadway Legend
joined:
7/23/03
A little night music original production information#61
Posted: 1/10/10 at 7:10am
Gingold performed the entire song sitting in the wheelchair and falling asleep at the end of the song (on the Broadway cast recording she can be heard falling asleep on the last syllables of the last word of the song, liaisons). I don't doubt PalJoey's recollection given his personal experience with the original production, which he has described. I don't doubt this recollection of mine either.

The Guardian published a story in 1995 that implicated him in some apparently corrupt deals at selling arms to Saudi Arabia. He sued for libel but the case collapsed when he was proved to have lied about his whereabouts during the trial. He was then prosecuted for purjery. He served 7 months of his 18 month term (not years - yesterday was a long day) but the libel trial and subsequent perjury trial did go on for years.

All charges against Maria Aitken for drug smuggling were dropped.

Her lover is being touted as an Attitude cover model.

Will he eclipse Ben Cohen or be the Irish Levi Johnston?

she also had sex with his father, a butcher, who then died of cancer.

Mme. Armfeldt is not around to witness this. She would call the whole affair "sloppy."

She wouldn't have ended up in any of their predicaments.

beaemma
Profile
Featured Actor
joined:11/24/09
Featured Actor
joined:
11/24/09
A little night music original production information#68
Posted: 1/10/10 at 6:57pm
I remember Hermione standing for at least part of the number, ending up seated downstage left. She was then whisked off by Frid after she dozed off in the middle of the last word of the song. By the way, I always assumed she had severe arthritis which might occasionally have given her a decent day or part of a day when she could manage with a cane and, of course, Frid's sturdy assistance.

"It's an evening to treasure." - Charles McHarry, NY Daily News

"Like a dry wine from a very good year." - Allan Wallach, Newsday

"The finest new musical to come to Broadway in nearly a decade or, since 'Fiddler' opened." Martin Bookspan, WPIX-TV

"Throwing caution to the winds, I assert that 'A Little Night Music' comes as close as possible to being the perfect romantic musical comedy." - Brendan Gill, New Yorker

"I'm grateful to 'A Little Night Music.' A stunning production that gave me a great deal of pleasure. " - Emily Genauer, NY Post

"'A Little Night Music' is a jeweled music box of a show: lovely to look at, delightful to listen to." - T. E. Kalem, Time

"The best musical this season. I had a wonderful time." - Leonard Probst, WNBC

"Here is areal magic that bursts forth to engulf the audience." - Rex Reed, NY Daily News

To show how times and Broadway economics have changed, here are the last two paragraphs at the end of a lengthy article from The Wall Street Journal dated February 27, 1973, written by Stanley Grover and reprinted inside the covers of the program .

"...The financial ramifications of the criticism, however, won't be known for some time to come. To break even in terms of its operating costs, the show must gross $61,000 a week. (By contrast, "Follies"--with a cast of 55 and considerably more elaborate appurtenances needed $84,000 a week to break even.) At capacity, the 1,475-seat Shubert Theatre can gross a maximum of $108,000--meaning that if 'Night Music" does operate at full capacity from the beginning, it could begin to pay off its backers in about 12 weeks.

Broadway being what is is, no, at the moment, is making any predictions."
ElizabethAngela
Understudy
joined:4/13/09
Understudy
joined:
4/13/09
A little night music original production information#70
Posted: 1/10/10 at 9:45pm
And of course, there was the infamous first preview "Liaisons" with the ill-fated bathtub.


Were they having Mme Armfeldt singing "Liaisons" while in a bath?
ElizabethAngela
Understudy
joined:4/13/09
Understudy
joined:
4/13/09
A little night music original production information#71
Posted: 1/10/10 at 9:52pm
If I recall correctly, there's a great story about Hermione Gingold's audition. She was explaining to Sondheim and company how much she had in common with her character, meaning the age and whatnot, and then she pointed out how Armfeldt's wig slumps a bit at the end of Liasons, to which Hermione responded by taking her wig off revealing she was completely bald.

I could be mistaken, but this reminds me of something I read somewhere. Is it true that at the end of the play, when Mme Armfeldt dies peacefully, her wig is supposed to fall off? If so, does Angela's wig fall off in her dying scene?

But no, Angela's wig doesn't fall off. She drops her playing cards, and her head falls back against the wheelchair.

But no Angela's wig doesn't fall off. She drops her playing cards, and her head falls back against the wheelchair.

Good idea about the *SPOILERS* I'm relieved to know her wig doesn't fall off. I suppose, however, that I shouldn't ask too many *SPOILER* questions, because I hope to see the show myself one night. I'm waiting until the weather is much warmer, April at the earliest. That is why I'm hoping it's true that Angela will renew her contract and stay into June. I would so much love to see her again, and I will if I can make it again.
WOSQ
Broadway Legend
joined:7/18/03
Broadway Legend
joined:
7/18/03
A little night music original production information#74
Posted: 1/11/10 at 11:06am
Back to the blue set of costumes in London: 'white' costumes are often built in light blue because if they were really white and then hit with white light, they would turn electric white and be essentially as blinding a costume as could be. In blue and then hit by white light, they would register as white-white. Make sense? Perhaps the costumes are the same, but the lights were gelled differently or the cameras used a filter and the blue shines through.

[I learned about the blue-as-white trick from a story about the wedding dress in Fiddler being blue and Robbins or Prince going to Patricia Zipprodt and saying 'What the hell did you do?' and she told them to just wait.]

The only time Hermione moved on her own during the show was during Liaisons. All other times she was deliberately used as a living prop and was moved, either in the wheelchar, being already set in place or being carried. On her curtain call she hobbled out with her cane, threw it away, straighted up and took a star bow. The original idea, wisely cut either in Boston or in rehearsal, was to have her throw her wig away during her call.

At least some of the birch trees used un the set were real. Birch lasts after being cut. I was told however that birches were not all that common in Sweden.

In Hal Prince's book called "Contradictions", he says Glynis was hypoglycemic and grew weaker during the tryout and previews, finally collapsing and going into the hospital. her understudy, Barbara Lang went on in Glynis' costumes, but because Barbara was several inches taller than the diminutive Glynis, the skirts were all ankle-length instead of being floor length. Tammy Grimes was asked anout her availability, but Glynis recovered (or sobered up--nobody's talking--you be the judge) and she opened the show.
"If my life weren't funny, it would just be true. And that would be unacceptable." --Carrie Fisher 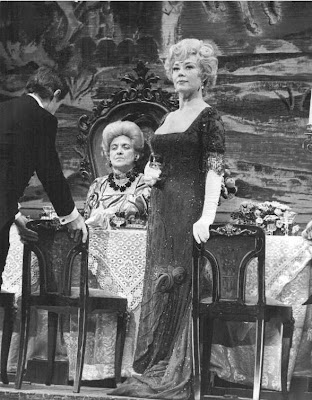 Spotlight on HAMILTON: Catching Up with Christopher Jackson